Are you ready for a 3-day weekend? You better be, because once we get back to work next week, training camp will be just a week away and the hockey talk will really start building up to what should be an intriguing season here in Nashville.

After the jump we've got a bushel full of hockey news, including an interview with Colin Wilson, a look ahead to what Columbus will face when they travel to Sweden, and a review of the best goaltenders in the Southeast Division, which includes a lot of familiar names for Predators fans...

Now that single games are on sale, readers of On the Forecheck can take advantage of a special discount offer for Nashville Predators tickets.

Predators Item of the Day

? Yes, they actually sell these on Amazon, and for just under $1,300, they're a bargain rather unique way to show your support for the team! 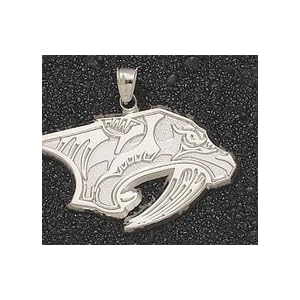 Nashville Predators 2010 Training Camp Central - Nashville Predators
The Preds have posted the training camp schedule, with your first chance of catching action coming on Tuesday, September 14 at 1:00 as the rookies practice at Centennial Sportsplex.

Cameron refutes report of Ellis deal - Buzzing The Net
Just as rumors of a Ryan Ellis trade in junior hockey were starting to fly around, Mississauga's GM and head coach shot them down.

Preds On The Glass: POTG Travelogue Visits San Francisco, Deadline Day 2.0, and Friday Findings
Buddy checks out the Haight-Ashburty district on his whirlwind tour of the West Coast in June.

Some Geoffrion quotes - Predators Insider
Josh Cooper gets some thoughts from both Blake and his father Danny about making the jump from college to professional hockey.

Grasping for Easy Answers - The Spin
Damian Cox points out the whether they hire Donald Fehr or not, the NHLPA has a fundamental weakness. "What this remains about, really, is the committment, or lack thereof, of NHL players to be masters of their own affairs. They don't trust one another, quite obviously, are generally terribly uninformed about their own organization, and most recoil when asked to participate in even a conference call, let alone a full-blown meeting."

Down Goes Brown: A behind the scenes look at the Kovalchuk negotiations
Oh, to be a fly on the wall...

Savard’s Agent Will Go Rambo If Contract Is Revoked - Hockey or Die
Marc Savard's agent doesn't like this talk from the NHL about possibly voiding back-loaded contracts, and blasts Gary Bettman for taking "the owners' side on every issue."

Sweden Prep: Who are the Malmo Redhawks? - The Cannon
Looking ahead to the Swedish team that will play the Blue Jackets in an exhibition game on October 5th. I've actually driven right by Malmo a few times on the way to Lund, when I used to work for a Swedish company several years ago.

Reality check on Eklund . . . Does he know much about the Oilers? - Cult of Hockey
We all know that Eklund's hockey rumors are a steaming pile of garbage, but his recent analysis of the Oilers might be even worse.

Survivor Effects: If a Player plays 82 Games this Year, how many will he play next year? - Behind The Net
When making your fantasy hockey projections, Games Played pretty much drives everything else, so keep this info in mind...

In which former NHL coach Ken Hitchcock foils a shoplifter - Puck Daddy
A nice story here involving one of the class acts among the NHL coaching ranks.

Storylines from the 2010 NHL offseason - From The Rink
Cassie asks which has been the most overblown story of the summer... my vote went to all the "lockout in 2012" noise that was raised in the background of just about every other development.

*Amazon affiliate link - if you click through and buy something, I'll get a small referral fee from Amazon.