Share All sharing options for: "The Predator" revealed in NHL's Guardian Project

He's a "Titanium Music City Super Cat", and this evening, "The Predator" was revealed as part of the NHL's Guardian Project. Each night during the month of January, a new superhero tied to each NHL team (created in a partnership with Stan Lee) makes his debut. In a poll at the Guardian Project's Facebook page, The Predator defeated The Blue for the honor of taking his bow tonight, as opposed to later in the month.

The Chicago Blackhawks come in to Nashville on Saturday, your last chance to catch the Preds at home during the month of January! Save a few bucks and use our discount code for cheap Nashville Predators tickets to this, or any other home game. 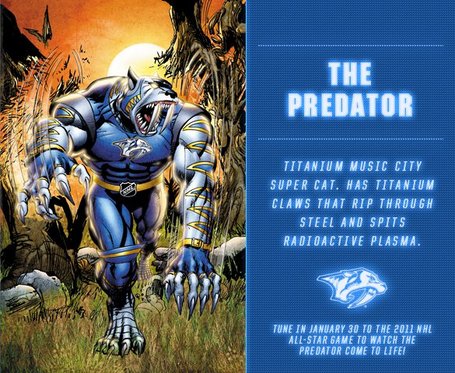 "The Predator" ("The Pred") is a fan of all music seeing as Nashville is Music City. A skilled musician, he is comfortable with almost any instrument but the guitar is his favorite and he loves sitting in the rafters of the Grand Ole Opry. The Pred is an outdoorsman, like many of the Guardians, and his sense of smell makes him an excellent tracker.

As a result of Tennessee being nicknamed the Volunteer State, the Pred is the most duty driven of the Guardians. No matter the danger the Pred is the first guy to join the mission. His size might say otherwise, but he sees himself as the consummate underdog and as such he makes it his mission to outwork his opponents. This mentality makes him unbeatable in a fight, and the other Guardians use him as their own personal measuring stick in regards to personal fortitude. In the face of insurmountable odds, many a Guardian has uttered the phrase "What would Pred do?" - NHL.com

And so you can get to know him even better...