Is Pekka Rinne playing his way into Vezina Trophy consideration?

Share All sharing options for: Is Pekka Rinne playing his way into Vezina Trophy consideration?

It's not as absurd as it sounds. Though he's missed some time due to injury, the Predators' number one goaltender is currently playing at an elite level, putting up some jaw-dropping statistics that are second in the league to only the aforementioned Thomas' NHL 11-like numbers. Take a look:

After the jump, a little more on the performance of a player who is making his way into the league's elite.

Before we continue, let me clarify: Tim Thomas unequivocally should, and probably will, win the Vezina Trophy. Contending that Rinne should take home the hardware ahead of Thomas would be foolish.

What's not foolish, though, is making the point that the big Finn is performing better than those "bigger" names that are being tossed out in trophy discussion, like Carey Price or Henrik Lundqvist. He is - and the statistics bear this out. 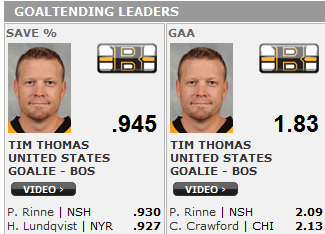 The Predators have the league's 3rd ranked defense, but that goals against number is not completely due to the strong play of their defensemen. In fact, Nashville's blueliners are giving up 30.4 shots per game, which is good for just 16th in the NHL, a rather pedestrian number. The great equalizer, then, is Pekka Rinne.

Perhaps we haven't seen the same number of "highlight reel" saves out of Rinne as in years past, but that's a product of him consistently giving up few rebounds and staying in position to make a save that looks much easier than it otherwise would be.

I do not believe that Rinne's current run of play is just another hot streak. He started the season strong, and instead of regressing to more average numbers, he's shown clear improvement as the season wears on. Take a look at these monthly splits:

Now, should we expect Rinne's numbers to continually get better? Of course not. But I would also not expect them to get significantly worse - this is one of the NHL's best goaltenders, and one that deserves entirely more credit than he receives.