If anybody has the right to be called "Every Coach's Dream" in Nashville, it's a guy like Jerred Smithson (most certainly not Chris Johnson of the Titans), who does the dirty, unrewarded work that is a prerequisite for team success.

Signed as free agent by Nashville in July, 2004

Follow after the jump as our player preview series examines the unheralded grinder who has established himself as a vital cog in the Predators machine...

While Nashville's centers went down with a variety of injuries last season, Smithson was a reliable presence, playing all 82 games while providing his trademark gritty defensive play. He placed 6th on the NHL's list of Faceoff Leaders, and took on any defensive matchup the coaches threw his way. Yes, his basic stats hardly jump off the page at you (5 goals, 8 assists, a -6 Plus/Minus), but the value Smithson provides went far beyond those numbers.

In the playoffs, his line with Nick Spaling and Jordin Tootoo created pure havoc at times, particularly against Anaheim. He scored one very famous goal, and added an assist in that series, before being shut out against Vancouver.

Well, we all now Smithson's not here to put the puck in the net.  One bonus from his play last season was that he drew more penalties than he took, which usually isn't the case for defensively-oriented players.

Here is where we're able to tease out some of Smithson's considerable contribution to the Predators in 5-on-5 play. His basic Corsi numbers look pretty bad, suggesting that he spends most of his time chasing the other team in Nashville's defensive zone. But since he has so many Zone Starts there (the most defensively-oriented on the team, and one of the toughest workloads in the NHL), his actual performance in light of those circumstances, as reflected in the Adjusted Corsi column, shows that he consistently pushed play in a positive direction.

Simply put, he's the guy who helps the Preds escape the shadow of their own goaltender, and with the departure of Joel Ward, could perhaps take on an even larger role as a defensive specialist.

Smitty is all about the penalty kill - for five seasons in a row, he's led all Nashville forwards in shorthanded ice time per game, where his faceoff dominance, willingness to battle along the boards, and ability to cover a lot of space to clog passing lines are most valuable. I've made the argument more than once that perhaps it might help for him to make a cameo appearance on the power play, winning draws then switching off for another player.

As for Smithson's Even Strength shots from last season, it's pretty typical grinder-type stuff, although he does fire a bit from the top of the right circle. As usual, blue are low-frequency shot areas, red are higher-frequency. 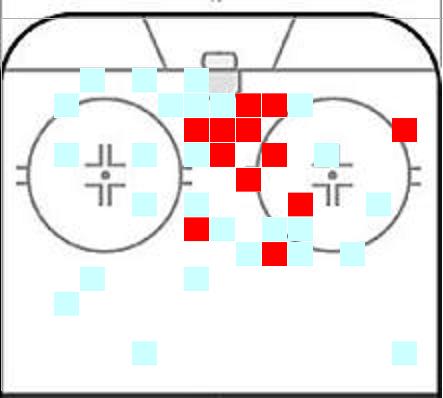 Smithson's career seems to be very much "steady as she goes" - here's my forecast for him from 3 years ago:

Last season Jerred Smithson became an every-night regular at the NHL level, playing 81 games for Nashville after 64 and 66 in the previous two campaigns. His even-strength work on a line with Radek Bonk and Jed Ortmeyer was pretty awful; I've said before that this may have been the worst line in the NHL last year. Where Smithson provides some additional value to Barry Trotz is his penalty killing work and relative success winning faceoffs. As competition increases for 3rd- and 4th-line ice time in Nashville, those are two qualities that might benefit him.

Hmm... any good sugggestions? Oh, there is this, I suppose, which become immortalized in an NHL commercial:

You know, though... I can't leave this one out! Remember this dandy from Minnesota a couple seasons ago?

The Positive: He keeps on keeping on, shouldering the bulk of the PK and critical faceoff duties, doing the dirty work that allows others to focus on offense.

The Negative: I can't come up with any significant downside to Smitty's game; he's all about hard work and sacrifice, and there's simply no reason to believe the Predators won't get that out of him.