One of the great surprises from the 2010-2011 Nashville Predators season was the development of Nick Spaling as a penalty killer and checking forward, which saw him assume a regular spot in the lineup. He moved ahead of more heralded draft picks, and is being touted for an even more prominent position on this year's team.

What are Nick's prospects for delivering the goods and becoming a productive two-way forward this season? We'll examine them after the jump...

Nick actually didn't make the Preds out of training camp, but those injuries at center required a call-up in mid-October. He formed a pairing with Jerred Smithson, spending a great deal of time killing penalties and battling other teams' top forwards at even strength.

In the playoffs, he burst through in Games 5 & 6 against Anaheim, scoring two goals in the series-clinching game, and while he added just two assists in the Vancouver series, one of them was on the famous Halischuk double-OT winner in Game 2. Those kinds of memorable moments punctuated a postseason performance that saw him finish 4th on the Predators in scoring.

Hmm... the results so far haven't been encouraging if we're looking for offensive production. One could make the argument that so far in his career he's been asked to play more of a heads-down, checking kind of game, but we haven't seen consistent playmaking so far.

Once you take the defensive responsibilities into consideration (see the negative Zone Starts), his Adjusted Corsi is only mildly negative, showing that as a young player pressed into service he did a pretty fair job dealing with adversity.

Spaling ended up 2nd among Nashville forwards in PK time per game, and appears slated for a similar workload this season. If anything, he and Smithson may need to pick up even more time there, considering the departure of Joel Ward via free agency, who was also a penalty killing stalwart.

As we look at Spaling's Even Strength shots from last season, blue are low-frequency shooting areas, red are high-frequency: 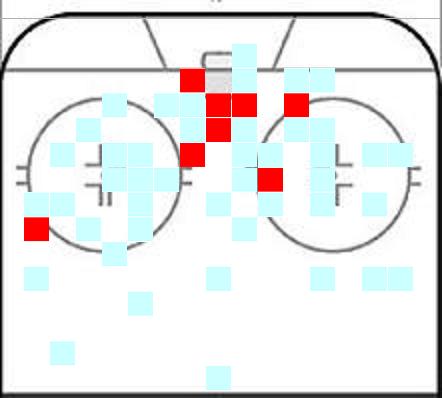 Nick received rave reviews from many observers at the end of the 2009 Development Camp, in which he stood out from the field:

Now there is something that myself, John Glennon, Paul McCann, and many others do agree on - that Nick Spaling has taken a big step forward and stands out from the pack with an all-around polish to his game. What I look for on days like this is a forward who can execute at high speed, make and accept strong, accurate passes, and use his speed or size to separate from defenders. They're not ripping their best slap shots or getting a chance to show their hockey sense in a 5-on-5 scrimmage situation, but you take what you can get, and Spaling just seems very slick compared to the other prospects right now. Might that translate into a 4th-line/PK opportunity this fall? It could be...

Here was a slick piece of work he pulled off against the Canucks:

The Positive: Develops into Vern Fiddler 2.0, able to provide spot duty among the Top 6 forwards while serving a primarily defensive role.

The Negative: Fails to rise above the 3rd-line and PK role from last season, hobbling the scoring wingers he's centering before that realization sets in.