Ryan Suter is one of the shining examples of Nashville's ability to draft and develop quality NHL defensemen, a player who seems to take significant steps forward every year, and has now reached elite status within the league.

The question now, however, is whether the Predators can afford to keep him, as Unrestricted Free Agency approaches in the summer of 2012, or will that year mark the apocalypse for the Predators' blueline?

The early portion of last season seemed like a disaster film, with Pekka Rinne getting knocked out of the opener, Matthew Lombardi getting hurt in the next game, then Suter suffering a knee injury on October 19. While he missed almost a month, he got right back to work upon his return, regularly logging 22+ minutes per night in all situations.

He ended up leading the Preds in assists with 35, and in the playoffs, tied for the team lead in defenseman scoring with a goal and 5 assists in 12 games.

There's not much of note here, with moderate rates of offense, although the mismatch between penalties taken and drawn is a bit of a problem. But we know that he's not a scoring sensation, right? So where can we see statistically just how strong Suter's game is?

This is where the hockey analyst in me goes boom-badoom-boom-boom for Suter's game. Those basic Corsi numbers tell you that the game is flowing in the right direction when #20's on the ice, but then when you throw in the fact that he takes all those extra Defensive Zone Starts, his Adjusted Numbers look even better, with both of the last two seasons ranking among the top 10% across all defensemen.

Plus, as we all know, he's often taking on the toughest competition, so it's not like he's getting easy work. Now, there is the issue of how much ice time he logs next to Shea Weber, and to what extent it's difficult to parse out their individual contributions to team success. As we saw during that early-season stretch when Suter was injured, however, the team struggled in his absence, lending credence

Even though he doesn't boast a shot like Weber's, Suter has developed into a solid PP asset, ranking 1st among Preds defensemen last season in 5-on-4 scoring rates (that is, power play points relative to ice time). He makes a nice complement to Weber in that regard, playing the setup man to the captain's slapper.

Suter is no slouch on the PK, either, logging around 2 minutes per game in recent years, with among the better Goals Against rates on the squad. Simply put, he's one of those rare defensemen who can be deployed in just about any situation, and chew up major minutes.

In the chart below, which shows Suter's shot locations at even strength last season, blue are low-frequency shooting areas, yellow are medium, and red are most-frequent. Yup, that's a left defenseman for you! 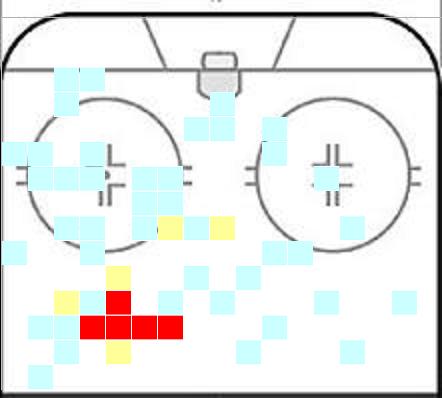 While highlighting a profile piece in USA Hockey magazine from February 2008, I wrote the following:

In spite of a few setbacks (such as the Brendan Witt trade in 2006 that cost him playoff playing time), Suter's improved each year so far, and looks to be a capable top-four defenseman for years to come. Assuming GM David Poile locks up this pending Restricted Free Agent in a new contract, he'll be a key player in a deep, talented blue line corps that already has Dan Hamhuis, Marek Zidlicky, Greg de Vries and Greg Zanon locked up through next season (Hamhuis and Zidlicky are signed through 2009-10 as well), and as the cherry on top, it's expected that Shea Weber will be signed, too. Just as in the 80's with his Washington Capitals teams, Poile has stocked his cupboard full of quality defensemen, even in spite of having to trade former captain Kimmo Timonen in last summer's salary purge.

Harken back to the 2008 playoffs, when the Predators overcame dire off-ice circumstances to make an improbable playoff appearance. In Game 3, they staged one of the most exciting comebacks I've ever witnessed, as first Suter's goal, then Jason Arnott's just 9 seconds later, drove Dominik Hasek out of his final NHL game and led the Preds to victory:

The Positive: He enjoys a little puck luck and cracks the 10-goal mark for the first time, while continuing to lead the way on both sides of the special teams battle. Who knows, he could even make his first All-Star Game appearance. If this scenario does pan out, he's got a shot at one of the top contracts for all defensemen in the NHL come next summer.

The Negative: Ends up having to scramble around more in the defensive end as the young forwards struggle with burdens previously handled by the likes of Joel Ward and Marcel Goc.