Despite some mid-summer giddiness in some circles over David Poile's talk of having a 3rd defense pair that was "new to the NHL", we have to remember that GM's are wont to pump up the prospects in July or August. As the reality of the regular season approaches, however, the value of a proven NHL hand becomes apparent, even if they don't have the theoretical upside that some of the kids do.

Two years ago, it was Francis Bouillon joining the Nashville Predators late in training camp to derail the notion that Alexander Sulzer, Cody Franson and Teemu Laakso would all start with the big club. This year, that honor goes to Jack Hillen, who appears to have made a favorable impression on Preds management and while we don't have definitive word yet, all signs point to him making the Opening Night roster.

Signed as free agent by Nashville in August 2011

Last year was Hillen's second relatively-full NHL season, and despite missing several games due to a concussion in November and December, ended up placing third among Islanders defensemen in scoring. This was sorely needed on a team which lost Mark Streit to injury, but after the season, the Islanders decided not to make a Qualifying Offer to Hillen, allowing him to walk away as a free agent. His end-of-season grade at Lighthouse Hockey lends some insight there:

The conditions keeping Jack Hillen from a higher profile are the same conditions he's faced since joining the Islanders as a college free agent when Ted Nolan was still coach: He's a great skater but is undersized; he has good offensive instincts but hardly possesses a cannon from the point; he can execute good defensive zone coverage but can be out-sized and even crushed when facing the NHL's bigger bodies. Along the boards, with his small stature, he seems to invite suddenly courageous NHLers to take a free run at a highlight reel hit.

Hillen definitely adds some offensive punch, with the only real concern here being a propensity to take more penalties than one might like, especially for a guy whose game isn't about physical intimidation.

A large part of why those Corsi numbers are negative is because the Islanders were just a pretty lousy team.

Hillen only played sparingly on the power play last season, but logged almost two minutes of penalty killing work each night. The downside is that his Goals Against rate was 2nd-worst among regular Islanders defensemen in 4-on-5 play in each of the last two seasons.

Here are Hillen's even-strength shots from last season, where blue represents low-frequency shooting zones, and red are higher-frequency. There are quite a few instances of Hillen sneaking down from the left point to the right side of the crease, so it'll be interesting to see if he takes those kinds of gambles with the Preds. If he wants to, that requires awareness by the left wing to fade back and cover up for his defensive responsibilities. 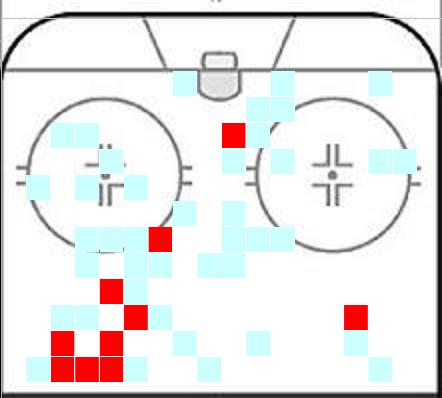 I took a walk through the archives and found that Hillen led the NHL in Holding penalties a couple seasons ago, never a good sign for a blueliner (thankfully he's toned it down since then):

What does a defenseman do when he loses position on an attacker? Hold him up, of course, and Hillen got whistled 9 times for being "all hands". Ryan Whitney, who split time in Anaheim and Edmonton this season, was second with 8 such calls.

Here's a good example of Hillen's ability to jump up into the rush when opportunity strikes:

The Positive: He forms a successful pairing with a more solid, stay-at-home defender like Teemu Laakso, and provides support on both sets of special teams, topping the 20-point mark once again.

The Negative: Struggles in a division loaded with large, offensively talented power forwards like Marian Hossa, Rick Nash, Todd Bertuzzi and David Backes. If he ends up having to hook, hold & trip opponents too often, that could earn him a ticket to Milwaukee. He'd have to clear waivers in order to make the trip, though.