Sergei Kostitsyn injured in 2nd period, reportedly held out of 3rd as a precaution

Share All sharing options for: Sergei Kostitsyn injured in 2nd period, reportedly held out of 3rd as a precaution

The party atmosphere tonight at Bridgestone Arena was interrupted with 7:59 left in the second period, as Nashville Predators winger Sergei Kostitsyn was hit by Tampa's Brett Connolly and subsequently fell awkwardly into the boards, with his left leg under him. He had to be helped off the ice and couldn't put any weight on that leg, and did not return to the game.

According to Jim Diamond of Nashville Predators Examiner, it may not be a lasting issue, and he may have been kept out of the 3rd period just because the Preds enjoyed such a large lead:

"It's very likely SK74 is being held out for precautionary reasons. His injury was nothing major according to a Preds official."

After the jump, a few photos show basically what happened...

First, Connolly comes in for the hit, a pretty basic shoulder-to-shoulder job that would otherwise go unnoticed: 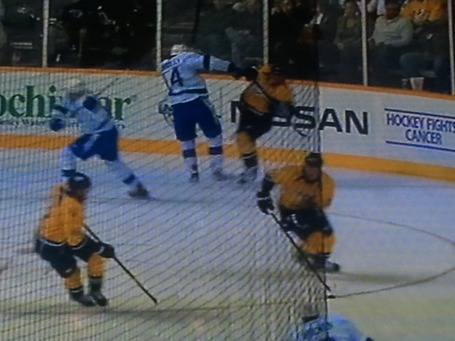 As he falls backwards into the boards, however, Kostitsyn's left leg goes up against the boards and his foot braces against the wall: 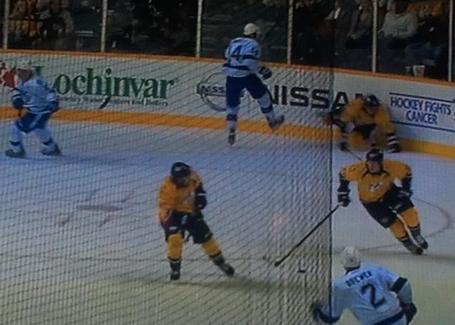 As he falls, his whole body weight goes onto that knee and ankle, causing him to lay on the ice for a while and require assistance heading off. 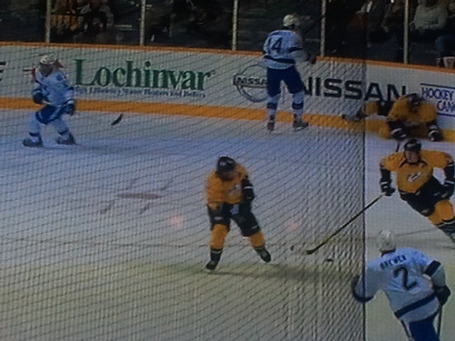 Hopefully, the fact that he missed the 3rd period was indeed simply a precaution, as the last thing the Preds need now is to lose another Top 6 forward just as they're starting to field a relatively healthy lineup. Stay tuned to tomorrow's practice updates from guys like @JoshuaCooper, @diamondhockey and @Smashville247 on Twitter to see if Kostitsyn gets right back to work.