After leading the Preds with 31 goals in 2009-10, Patric Hornqvist was rewarded with a new 3-year, $9.25 million contract. His goal total dropped by a third last season, however, leading some to wonder - did the Predators "buy high", or can Hornqvist return to the 30-goal level?

Follow after the jump as we break down his game and examine that possibility...

My theory as to why Hornqvist's goal-scoring took a step back in 2010-2011 has to do with the injuries which knocked one center after another out of the lineup. Hornqvist isn't the type of dynamic, carry-the-puck-all-the-way-up-ice winger who can create plays by himself, he's more of a sniper and garbage-collector who does his best work finishing off the scoring chances which other players create. Still, he ended up among the team leaders in goals, assists and points, and led the team in shots for the second straight year.

In the playoffs, after scoring two goals along with an assist against Anaheim, he was held scoreless in the Vancouver series, and still needs to prove his mettle in the postseason, with just 4 points in 14 career games.

Forgive me if I drool a little bit here; Hornqvist is a lean, mean, shot-producing machine, and last season, he showed the discipline to draw twice as many penalties as he took, too, creating more power play opportunities for Nashville.

What jumps out here is that although the Corsi numbers took a bit of a step back last season, we did see Barry Trotz deploy Hornqvist in more offensively-oriented situations; his Zone Starts were almost perfectly balanced between the offensive and defensive zones in 2009-10, but in 2010-11, he ended up with 58 more in the offensive end.

While he led Predator forwards with 2:45 of power play ice time per game, one gets the sense that there could be more of an opportunity there for him (last season, 110 forwards around the NHL got more PP work). He was no slouch on the other side of the special teams battle, either, playing a minor role (49 seconds per game) on the penalty kill.

In the Even Strength shot chart below, blue zones represent low-frequency shooting areas, yellow is medium, and red is most-frequent. There's no surprise here, as Patric makes his living in that triangle from either side of the goal out to the middle of the ice between the circles. 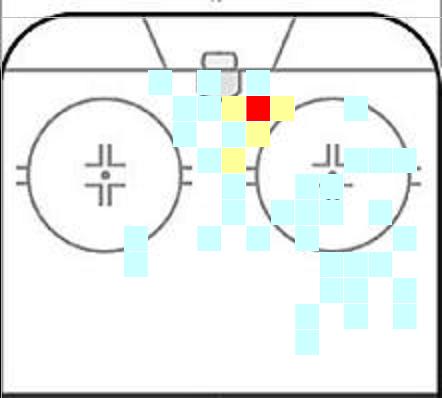 Back in the summer of 2008, I wasn't thrilled with the prospect of then-rookie Hornqvist being relied upon for major contributions. That 2008-9 team struggled to score, and is the only Predators team since 2003 to miss the playoffs.

Clearly there is hope for Hornqvist to step into an offensive role in Nashville, but if he snags 20 goals that would probably exceed expectations. Among the wingers, after Dumont and Erat there's nobody on that list that jumps out as a reliable offensive contributor for the 2008-9 season. It's one thing to get caught up in best-case scenarios like seeing Tootoo pot 20 goals, but realistically, there's not a whole lot to get excited about there.

This never gets old:

The Positive: He becomes a major focus up front on the power play (more than 3:00 per game), and enjoys a little puck-luck, as a shooting percentage of 12-13% leads him to 35+ goals and a new single-season franchise record.

The Negative: His hard-knock style of play causes physical breakdowns, undermining his ability to drive the net as usual.