There is perhaps no more under-appreciated job in the NHL than that of the defensive defenseman, who, like a referee, often performs best when you really don't notice him much during a game. Since, by definition, they aren't usually involved in scoring plays, they only come into focus when they have to sweep the puck out of their own net after the other team gets a goal.

These guys are going to end up on the wrong end of the highlight reels more often than not, even if they're doing what's asked of them. Such is the thankless task which has been assumed by Kevin Klein.

Follow on, then, as we preview one of the most polarizing figures on the Nashville Predators...

The prayers of many #split28 supporters were answered over the summer as Dan Hamhuis left Nashville, ending a defense pairing with Klein that seemed to be a constant source of turmoil and heartburn. Last season, Klein started out playing mostly alongside Francis Bouillon, and ended up with Jonathon Blum working the opposite side after his late-season recall from Milwaukee.

Over the course of the campaign, the criticism of Klein's game receded gradually, as he ended up with the best Plus/Minus figure of his career (+9) and anchored a penalty killing unit that resumed Nashville's usual place among the elite of the NHL. While his fellow 2003 draftees Ryan Suter and Shea Weber established their reputation as one of the top defense pairs in the league, Klein stepped into his own role as a shutdown defender and PK specialist, perhaps finding his niche.

Yeah, he's not much of an offensive force, that's for sure. One especially impressive aspect of Klein's game, however, is what you don't see - trips to the penalty box. For a guy who regularly takes on top opposing forwards, it's remarkable how few penalties Klein takes. That's an indication of how well he's able to skate and maintain position, without having to resort to hooks, holds or trips when he's beaten to the puck.

These numbers are middling, but again, that's not surprising given the task he's asked to take on. Note the heavily defensive Zone Starts, and how once that's taken into account, his Adjusted Corsi numbers are pretty close to break-even. The only note of caution was that Team Shooting Percentage from last season, which contributed a fair bit to his high Plus/Minus. Don't expect a repeat there, but don't panic if he's close to Even in Plus/Minus this year, either.

Last season Klein led all Predators with 3:10 of penalty killing duty each game, providing the foundation for a unit that placed in the NHL's top 5. His ability to soak up those minutes is hugely important to the team, not only due to his strong play there, but it also lifts some of that PK burden from Shea Weber, who can then be deployed in more offensively-oriented situations.

In this Even Strength shot chart from last season, blue areas are where Klein fired from at a low frequency, yellow is medium, and red is most-frequent. This looks like a pretty typical selection for a guy who pays attention defensively and doesn't stray very much from the right point: 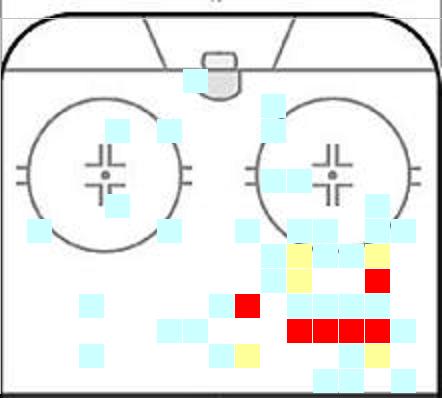 Last year must have been frustrating for Klein, as he failed to make the big team coming out of training camp, and his early work in Milwaukee drew sharp criticism from Barry Trotz. Later on there was some experimentation with having him play wing in practice, in order to back up some banged-up Predators forwards, but that never panned out and Klein ended up dressing for only 13 games for Nashville, as Ville Koistinen jumped ahead of him on the depth chart. The time is definitely now for the 23 year-old, who, while having lagged behind his fellow draft classmates Ryan Suter and Shea Weber, still has plenty of upside to his game.

For a good example, check out the video highlights from the Oct. 25th game against the Atlanta Thrashers last season. He set up Jordin Tootoo for a goal with a great effort bringing the puck up through the neutral zone, blowing by one of the Thrashers and sending a perfect pass to Tootoo for the score. It was the kind of play that left fans hungry for more, but they're not going to get it unless Klein can show the consistent effort required to earn ice time each night.

Given the core group of defensemen that are entering their prime years in Nashville, Klein is likely going to play a part-time role as a 3rd pair/PK specialist this year, spending some time in the press box as well simply due to numbers. In the event of injury, I could see him getting a top-four job on an interim basis, but the Predators front office has usually shown a great deal of patience (some might say too much) bringing along young talent.

Sometimes, you have to a little beyond your job description and play goalie, too:

The Positive: Steady as she goes - if Klein delivers another performance like last season, the Preds will take that and run with it.

The Negative: It looks like he'll start out with Jonathon Blum alongside again, and there is the risk of a sophomore slump there. Good team defense can sometimes be like a house of cards; if one part of the operation runs into issues, it can cause the whole thing to collapse.