Sergei Kostitsyn came to Nashville with more questions than answers last summer, and surprised everyone by not only earning the confidence of the coaching staff and taking on a leading role up front, but leading the team in scoring as well, all for the bargain price of $550,000, the lowest salary on the team.

Traded to Nashville in 2010 for Dan Ellis & Dustin Boyd

That performance earned SK74 a nice raise this summer, but can he repeat that performance, or perhaps build upon it? Let's find out after the jump...

A broken toe limited Kostitsyn's mobility at the start of the season, and he had to earn his way up from the 4th line over the course of time. Through the end of November, he had just two goals and one assist through 19 games, and a -7 Plus/Minus. I wasn't impressed at the time, but OTF readers gave him a hearty thumbs-up in a poll and wanted to see how things played out.

As soon as the calendar flipped over to December, though, something changed. An 8-game scoring streak got him started, and a steady spot on top scoring lines kept him producing down the stretch, with him ending up as the team's surprise leading scorer. The playoffs were another matter, however, as he contributed four assists against Anaheim in the opening round, but was completely shut down by Vancouver in the second.

Over the summer, after a bit of controversy over whether he had properly received a qualifying offer from the Preds, he ended up signing a one-year contract extension for $2.5 million.

This right here sums up my main concern with Kostitsyn's game, one which may get overlooked by those goal totals from last season. His Shooting Percentage was off the charts good in 2010-2011, and I'd bet my bottom dollar that he doesn't come within a whiff of it this season. Even if you give him credit for taking high-quality shots rather than just firing from everywhere, say at something deserving of a 15% clip, that would knock him down to being more like a 15-goal scorer than a 20-goal man, which makes a big difference in public perception.

Kostitsyn needs to shoot more often to be considered a major offensive threat, and the odds are against that just happening all of a sudden. One shining example for him to emulate might be Toronto's Mikhail Grabovski, a fellow Belorussian who stepped up his game when thrust into a leading role with the Maple Leafs. Kostitsyn will presumably get every opportunity to do the same with the Predators, but what did we see during the preseason?

His Corsi numbers were ever-so-slightly underwater last season, which isn't too bad considering he's often facing top opponents, and he does have a well-deserved reputation as a good defensive player. Those Team Shooting Percentage numbers seem ripe for a fall, however, which could bring his Plus/Minus plummeting downard.

There is probably opportunity available for an expanded role on the power play, as SK74 received 1:53 of such work each game last season, and boasted some of the better individual results there. Despite coming to Nashville with the reputation for being a strong penalty-killer, he only got a morsel of such ice time. If the Predators want to maximize his offensive contributions, that's probably a wise choice.

A look at SK74's Even Strength shot chart from last season does show a nice propensity to work the slot. Blue zones are low-frequency shooting areas, red are higher frequency: 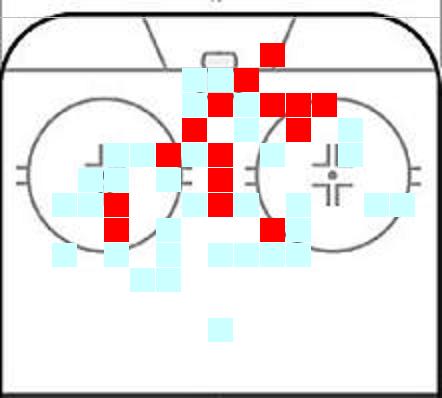 Why rumor-mongers link this guy to Nashville is beyond me; he's a marginal NHL player, and obviously doesn't have the character that the Predators are notorious for focusing on.

Yeah, this was an easy choice:

The Positive: He asserts himself as an offensive force with defensive responsibility right from Game 1, changing his perception from "a poor man's Martin Erat" to "Trotz's dream version of Alex Radulov".

The Negative: That hesitance to shoot remains a problem, and his shooting percentage returns to mortal levels, leaving him soaking up Top 6 ice time while delivering Bottom 6 offensive production.