He leads the Nashville Predators in career Games Played, Goals, Assists and Points, and is relied upon to fill a variety of roles for Barry Trotz on a nightly basis. But for many fans, David Legwand represents a reservoir of untapped potential, perhaps a legacy from that 2nd-overall draft choice which kicked off the Predators franchise back in 1998.

As he embarks on his 12th full season as a Nashville Predator, how much should fans expect from Leggy?

Nashville's grand plans up the middle went to pot in the second game of the year, when Matthew Lombardi went down with his season-ending concussion. Until Mike Fisher arrived via trade in February, Legwand was thrust into the primary role up front, and put up two goals and six assists through his first 16 games, before suffering a leg injury in Montreal on November 18.

After an abortive comeback attempt against Detroit three weeks later, he returned to the lineup for good on December 31 and was able to get back to contributing again at his usual pace, but what really seemed to light up Legwand's offensive game was the addition of Mike Fisher via trade:

I've written about this effect before, as we saw it with the production of Marcel Goc and Cal O'Reilly when Legwand was either in the lineup, or out. Sometimes, the presence of a player in the lineup isn't expressed so much in their individual stats, but instead, their ability to take on the tough matchups and free up other teammates to score.

During the playoffs, Legwand enjoyed a second strong postseason in a row, finishing with 6 goals and 3 assists in 12 games. Has he built enough of a resume there that we can look at him as a reliable playoff performer?

That late-season stretch really pumped up Legwand's offensive production, with the only real drawback here being his tendency to commit more penalties than he draws from opponents. You'd like to see your Top 6 forwards strongly positive on that front.

The whole two-way play issue comes into focus here, as we see that Legwand's basic Corsi numbers are right around break-even, but that becomes pretty remarkable when you consider the Zone Starts, which were steeply tilted towards the defensive zone. Once you take that into account (see the Adjusted Corsi column), we can appreciate more fully how well he handles the workload given to him by the coaching staff.

When you start in your own zone, the odds are tilted against you, but Leggy fights through that adversity on a regular basis.

More of a 2nd-unit contributor on both sides of the special teams battle, Legwand is threatened for ice time by some of the specialists on the roster, like Jerred Smithson and Nick Spaling on the penalty kill, or Cal O'Reilly on the power play.

Here's a look at Legwand's Even Strength shot chart from last season, which shows a strong tendency to work the prime scoring area between the circles (blue is low-frequency, yellow is medium, red is high): 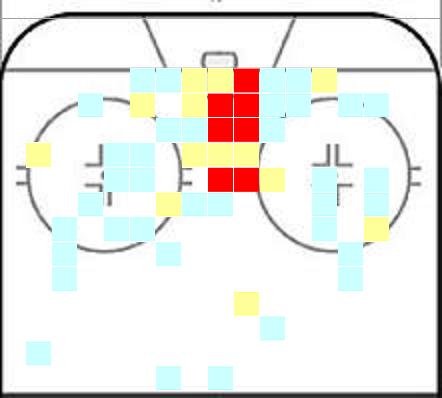 David Legwand (65 GP, 15 G, 29 A, 38 PIM, -4): Legwand's hefty contract extension and career-best offensive year in 2006-7 had some expecting a 30-goal season from Nashville's original draft pick, but solid two-way play and top-notch special teams work are nothing to dismiss. His point-production on the power play actually exceed Arnott's (3.82 points per 60 minutes of PP time to 3.46 for the captain), and on the penalty kill, he was a key cog in the 3rd best PK squad in the NHL. Grade: B

How fitting it was for the Original Predator to put a capper on the franchise's first playoff series win:

The Positive: He stays healthy and provides the kind of two-way play that allows for the rest of the forwards to be deployed in specialist roles which suit their strengths and cover their weaknesses, while topping 20 goals and 50 points.

The Negative: Fails to click with the kids up front and slips below 40 points, opening the door for one of the young'un's to pass him on the depth chart.