Cal O'Reilly tantalized Nashville Predators fans with his offensive contributions early last season, establishing some chemistry with Steve Sullivan. A protracted cold stretch culminated in a season-ending leg injury, however, putting his ascension within the Preds organization on hold until this fall. With competition rising from youngers players like Blake Geoffrion and Craig Smith, can Cal still carve out a role for himself as a playmaker?

Sure, we're into the season now, but I'll keep plugging away with these player previews if you follow after the jump!

When Matthew Lombardi went down with his concussion in the second game of the season, there was good reason to worry about Nashville's ability to keep scoring goals; he was, after all, the team's headline-grabbing free agent acquisition. O'Reilly stepped in seamlessly, however, putting up 3 assists in the very next game, a 4-3 win over St. Louis. Through 27 games, he had compiled 6 goals and 12 assists, and seemed to assume a real leadership position up front.

That's when an 11-game scoreless streak kicked in, however. It seemed to coincide with a further injury to David Legwand, thus leaving Cal without someone to else to draw away opposing team's top defensive players. We never got to see him try and pull out of that, however, as he suffered a broken fibula on January 2nd vs. Columbus, and never made it back into action the rest of the way, serving as a healthy scratch during the playoffs.

Cal shows up as a pretty fair playmaker here, with decent assist numbers for not being that much of a goal-scorer. As you can also see, he doesn't shoot the puck very much at all, making even Sergei Kostitsyn look like Alex Ovechkin. If he doesn't establish himself more as a direct scoring threat, defenders around the like can more easily play him as a "pass first, second and third" type of forward.

Two seasons ago, Cal struggled in 5-on-5 even though he received a healthy portion of offensive-zone faceoffs, but he fared better last year. That's encouraging from a developmental standpoint, and will be an interesting measure to follow this season.

Nashville definitely has room for a power play specialist, and that's where O'Reilly seems to be earning a niche. Last season he played 2:16 per night on the man advantage, but he was among the team's least productive forwards there. I think it's too early to give up on that front with Cal, however, as he clearly has good puck handling and distribution skills, and it's not like the Preds are loaded with better options.

With so few shots on the season, pretty much everywhere he shot from at Even Strength appears as a "hot zone" here. It is good to see the majority coming from the slot, however. 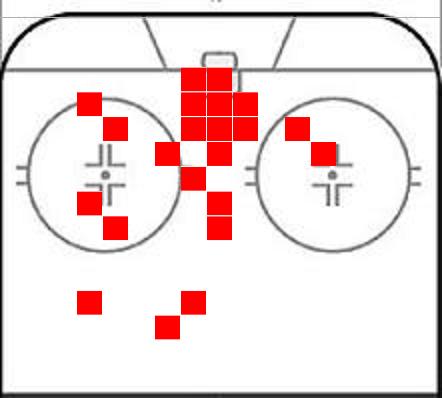 It seems like Cal's been on the cusp of either taking a major role with the team, or perhaps shipping out, for quite a while. This is what Chris wrote last year at this time:

By now, you know the drill - promising young center, drafted by Nashville, makes the team but fails to stick. We've seen it with Rich Peverley, now one of Atlanta's key offensive pieces; and we just saw it again with Mike Santorelli, who has a chance to start the year centering Florida's 2nd line.

It's with a fair bit of trepidation, then, that we watch the development of Cal O'Reilly. The Predators have needed a 2nd scoring center ever since I can remember, and though Colin Wilson will grow into that role in time; the present sees the team without an offensive-minded player to work the line behind Matthew Lombardi and anchor a 2nd power play.

Barry Trotz has given O'Reilly a prime (and what I believe to be his last) opportunity to make an impact at the NHL level. In camp and the last several preseason games, he's centered Patric Hornqvist and Steve Sullivanon the 2nd line. Can he finally make the most of his chance, or will he be waived and lose his spot to a veteran like Jamie Lundmark?

The Positive: Earns a job on the power play and provides that jolt of offense that the Predators sorely need up front, netting around 40 points.

The Negative: Finds himself pushed out of the way by the likes of Craig Smith, Blake Geoffrion, and Nick Spaling, resulting in a ticket out of Nashville.