Share All sharing options for: Predators vs Blue Jackets Preview: Revenge for Marty?

The Nashville Predators welcome in the Columbus Blue Jackets for their first visit to Bridgestone Arena this season, after having beaten them 3-2 at Nationwide Arena in the season opener for both teams. At 3-13-2, the Blue Jackets are pretty much the laughing stock of the NHL, especially considering their highly publicized acquisition of top-dollar players like Jeff Carter and James Wizniewski over the summer. Expectations were much higher in Columbus, to say the least.

Rather than stick with the usual preview format this morning, I'd like to focus on an incident from earlier this season, and ask whether or not it plays a role tonight...

During the first meeting between these teams on October 7, the Blue Jackets' Derek Dorsett put a rather subtle head shot on Martin Erat, which caused him to miss 3 weeks of action. Now granted, Marty put himself at risk as he was moving in one direction while looking in another, but Dorsett certainly didn't pass up the opportunity to put his shoulder into Erat's head.

Brain McGrattan wasn't on the team yet when this game occurred, but I have to ask - does he do anything about this tonight? If ever you wanted to send the "don't mess with our stars" type of statement, this would seem to qualify.

I wish I could share the video I'm seeing on this, as I know these stills won't do it justice, but here we go. 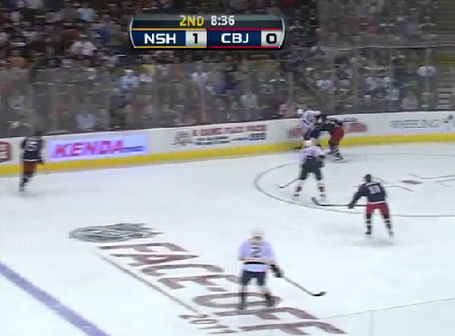 Erat's along the boards protecting the puck, while Dorsett (#15) covers the point. 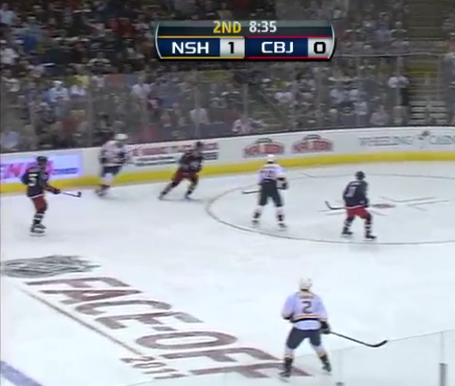 After Marty plays the puck behind the net, he peels off the wall and starts coming into the middle of the ice, while Dorsett starts coming down from the blueline. 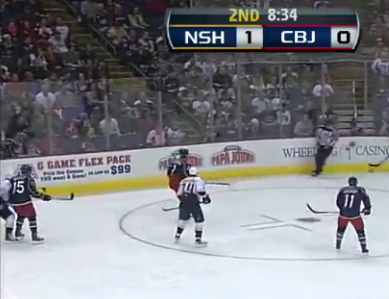 At the far left of the scene, Dorsett catches Marty in the head with his left shoulder... 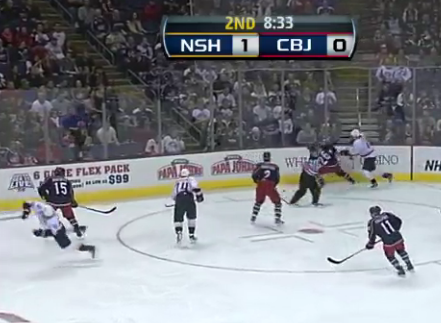 ...and Erat goes flying off to IR for 3 weeks. The night before this game, Don Cherry talked about exactly this type of hit (thanks to Willy Daunic for reminding me of this). Jump to the 3:50 mark of this video for some examples:

Now granted, I put a lot of the blame here on Marty, because he moving into the center of the ice while looking in another direction, but Dorsett took the opportunity to deliver a pretty good head shot (on video you can see that he leans into the hit).

So do the Predators try to exact some revenge tonight, or at the very least send a message that "you won't do that again"?