Predators vs Red Wings preview: The Battle Is Joined

Share All sharing options for: Predators vs Red Wings preview: The Battle Is Joined

The Nashville Predators face their greatest rival for the first time this season tonight at Joe Louis Arena in Detroit (6:00 p.m. Central on FS-TN). The Red Wings are coming off a shootout victory over Boston in yesterday's marquis matchup, so perhaps the Preds can catch Detroit at the right time, lacking some energy after having played the day before (remember how well that worked against Edmonton?).

The story with Detroit, as always, is their dominating level of puck possession at even strength; 2nd in Shots For and 1st in Shots Against in 5-on-5 play is a pretty solid formula for success.

With 7 wins in their last 9 games, the Red Wings have turned around an 0-5-1 stretch to climb up to 4th place in the West, just 2 points behind Chicago with two games in hand.

Perhaps the biggest surprise about this team is who's leading Detroit in scoring:

Henrik Zetterberg has gotten off to a particularly slow start, but he does have a goal and 3 assists in his last four games, so he certainly can't be discounted.

The Red Wings are represented within SB Nation over at... 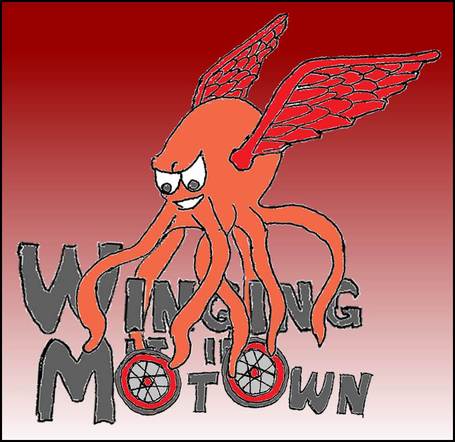 The big story to watch tonight is how Roman Josi fares in his NHL debut. Sure, he'll likely get rolling with limited action on the 3rd pair (alongside Jonathon Blum, perhaps?), but if the Preds can get break-even (or better) play out of that group, it can provide a bit of cover for the rest of the bunch. Last season, Nashville went 4-1-1 against the Red Wings, and have won the last two times they visited Joe Louis Arena.

Up front, the hot hand for the moment belongs to Jordin Tootoo, who has now scored in Too (err... two) straight games. While it would be nice to see Toots maintain the momentum, what's more important to Nashville is getting a standout effort from the main between the pipes (and here's to hoping he stays there):

Make sure to stay tuned for tonight's recap, which will be provided by a special guest star...