Share All sharing options for: Predators vs Kings preview: The Late Late Show's in L.A. tonight

The Nashville Predators will try to keep their road magic (5-2-1 record away from Bridgestone Arena) alive as they face off in a late-night contest against the Los Angeles Kings, at 9:30 p.m. Central on FS-TN. After having dropped 3 out of 4 decisions against the Kings last season, can the Preds get the early advantage on a team which is expected to be a rising power in the Western Conference this season?

Follow after the jump as we look forward to tonight's action...

The Tale Of The Tape

It's a long road out of the pit that the Preds' opening two weeks of play put them in, but the Shots For & Against numbers are at least heading in the right direction. The danger zone here is the Kings' 5-on-5 play, where their 28th-ranked shooting percentage is likely to rebound over the coming months, so the risk is that they've just been riding a cold-streak overall as a team (let's hope Pekka Rinne keeps it that way tonight).

The Kings are represented within SB Nation primarily at... 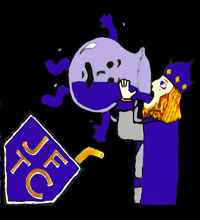 "Alternative" Jewels From The Crown logo by Earl Sleek

After losing last night to the Sharks 4-2, even the Kings bloggers think their team is boring:

I think I even know why the Kings are boring. They're boring because they only have one setting. Whatever it is that they're being told to do, whatever creativity-sucking, mind-numbing scheme they're following, they don't seem to be able toshift gears and do something else when it's not working.

Whatever the problems are in L.A., you certainly wouldn't seem to blame them on this guy, who currently sits 3rd in the NHL scoring race:

The Slovenian sensation comes into this game with a goal and assist in each of his last two games, and 15 points in 19 career games against Nashville.

With the Kings, however, there's always a different guy who stands out to me. Dustin Brown is known as a decent Top 6 winger and team captain, but he's shown the remarkable ability over the long haul to create power play opportunities for the Kings by drawing penalty calls - I used to tally something I called "Penalty Plus/Minus", in which he led the league in 2007-8 and 2008-9. Behind The Net started tracking things in a similar fashion, and in 2009-10 and  2010-11, he continued to rank among the league's best.

It's a significant advantage, too; for a guy to generate something like 40 power plays for his team over the course of a season, that translates to about 10 goals (combining extra Goals For with reduced Goals Against), which alone is worth 3-4 points in the standings.

So if the Preds head to the box tonight, keep an eye on Brown...

Josh Cooper reports from California that Nick Spaling is not expected to play tonight, but that Sergei Kostitsyn and Kevin Klein are questionable.

The key line to watch for the Preds lately has been that of Colin Wilson-David Legwand-Patric Hornqvist, who have worked well together so far. Hornqvist has goals in 5 straight games (one off the team record), and Willy seems to be moving the puck smartly rather than stickhandle through multiple players, so we'll have to see if he can keep Hornqvist rolling tonight.

On defense, if Klein isn't ready to go the blueliners will be sorely tested by a talented group of L.A. forwards, and it will be incumbent on Nashville to play responsible defense as a unit.

Make sure to come back and put a pot of coffee on, so you can join us for the Game Thread! As Craig Ferguson says, "you can always sleep through work tomorrow"...