The Predators beat a bad Ducks team at home tonight--thankfully--and with a little luck, could have done so more handily.

The Ducks didn't even register a shot on net through the first 14:57. In the meantime, the Predators had already put the puck in the net twice, to no benefit on the scoreboard. Colin Wilson had an early power play tally erased by an on-ice "distinct kicking motion" call that the situation room in Toronto felt distinct enough to let stand upon video review. Then Mike Fisher whacked a loose puck from Dan Ellis' glove, but was rebuffed by the infamous "intent to blow" rule.

Having thoroughly dominated so far, with nothing to show for it on the scoreboard, the Predators risked a real psychic collapse when the Ducks scored first, just 38 seconds in the second period. Andrew Gordon muscled Roman Josi to the ground in a board battle and Josi's hesitation getting up let Gordon cruise to the front of the Preds' net mostly unmolested and score.

The Predators, though, despite a few sloppy shifts, mostly kept the Ducks at bay. They finally broke through when Colin Wilson nicely hesitated on a breakaway and found Nick Spaling alone in the slot. Roman Josi drew the only defenseman on the Ducks' roster, Toni Lydman, out of the play, giving Spals a clear lane.

Nashville took its first lead of the night when Roman Josi scored his first career NHL goal on the Preds' third power play. Jordin Tootoo then gave the good guys the most dangerous lead in hockey, going coast to coast on a nice bank pass from Kevin Klein.

Francois Beauchemin brought the ducks within one after a hard-working forecheck late in the third period, but it was too little too late. Josi totally took Pekka Rinne out of the play on this goal with a nice shoulder to shoulder hit, further asserting that nothing of significance happens on the ice that Roman Josi doesn't directly cause.

highlights, notes & errata after the jump

Post-game audio is available from Barry Trotz, Jordin Tootoo, Colin Wilson, and Roman Josi (click each name for the MP3).

Here's your OTF fan of the game. There's nothing funnier than watching someone making a life-changing revelation, while goofy, stereotypical Italian music plays. 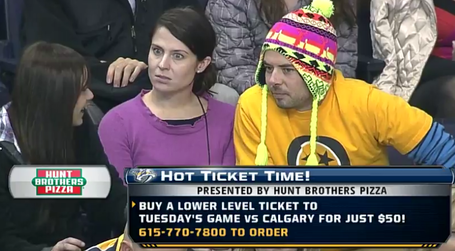