Share All sharing options for: Into the Film Room: David Legwand's 1st period goal against Detroit

Patric Hornqvist is a goalscorer. When he's not scoring, it's fair game to critique and complain. That said, there's quite a bit more nuance to his game than just banging in garbage goals, and he had a spectacular game on Wednesday night, despite only registering an assist.

After the jump, take a break for a moment from the Mike Fisher madness, and let's have a look at David Legwand's goal from the big win over Detroit. 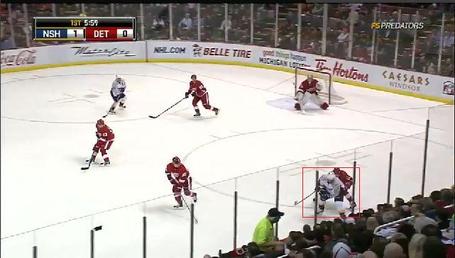 The play begins harmlessly enough, with David Legwand simply turning the puck low to begin the cycle. Patric Hornqvist will pick it up from Legwand low in the zone. 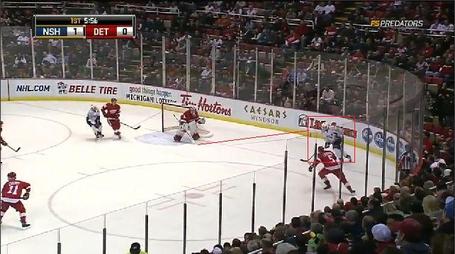 Hornqvist acquires the puck behind the net with basically two choices - he can rush Jimmy Howard and try a shot, or kick it out to the point and let one of the defensemen create a rebound. He opts for the latter, which in this case, was a solid choice. 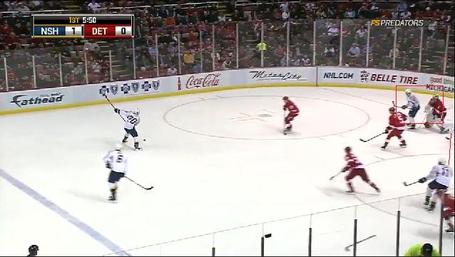 The puck comes to Ryan Suter, who prepares to tee up the shot. Hornqvist, though, has taken up residence directly in front of Howard, preventing him from seeing anything but Swedish backside. The screen does two things: a) it allows Suter's shot to arrive without being seen, and b) it prevents Howard from noticing David Legwand preparing to pick up the rebound on the right side of the screenshot. 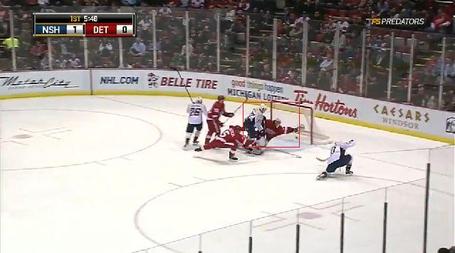 As expected, Suter's screened shot creates a big rebound, allowing Legwand to jump on it and easily put it past Jimmy Howard. The reason Legwand was able to score so effortlessly? Patric Hornqvist, who expertly shifted his screen as play dictated. By the time Howard found his way out from behind Hornqvist, David Legwand had scored the game winning goal.