Is The Mike Fisher Trade A Long-Term Loss for the Nashville Predators?

Share All sharing options for: Is The Mike Fisher Trade A Long-Term Loss for the Nashville Predators?

In analyzing the Mike-Fisher-to-Nashville trade, many are quick to point out that Fisher is not a rental, as justification for the first-round draft pick price. The Predators will have Fisher under contract for two seasons after this one, through 2013. In his day-of interview on 104.5, David Poile extolled the situation, likening rental deals to "a homerun or a strikeout, and more times than not it seems to be a strikeout," explicitly referencing the Forsberg trade.

Poile's characterization of rentals, though, seemed like an odd reason to be excited to take on a multi-year deal...

Multiple years of team control can certainly add to a player's trade value, but only if the contract is a good deal. If the player underperforms, and the team would theoretically better off filling the position through free agency, the player has virtually no trade value. And any inefficiencies in the payroll, especially for small-market team like the Preds, caps the maximum amount of talent on the roster. In the parlance of Poile's metaphor, the homeruns are bigger, but so are the strikeouts.

While selling teams want to get something for a player they'll soon lose, rentals do have unique appeal to buyers--they reduce risk. If the player underperforms, the team can just let him walk. The bright side of a strikeout is there's a quick chance for turn-around in the next at bat. Besides, there aren't true rentals in the NHL, where a deadline pick-up's rights can be flipped for a player like Sergei Kostitsyn, after the season.

Mike Fisher helps the Predators now. For a team weak up the middle, and desperate to impress their free-agent-to-be captain with a Stanley Cup run, Fisher brings offense, defense, and playoff-style intensity. But is Fisher a good long-term fit for the team financially? Or will he become a useful, but unmovable player, a la David Legwand, with whom he is often compared?

Hockey Prospectus has one answer, and not the one you want to hear:

In Mike Fisher's case, a $4.2 million cap hit would require a GVT of 11.1 to break even. Unfortunately for the Predators, Fisher has averaged only 7.9 GVT over the past three seasons, is past his prime, and on pace for only 2.0 GVT this season. That means that Nashville can expect to lose at least three goals a season for two more seasons based on acquiring Fisher at this contract.

We're not concluding that Fisher won't contribute to Nashville's success; the conclusion is that Fisher is not an efficient asset. For the same cap space, Nashville could either get a much better player, or the same caliber of player but with room left over for another.

GVT, or Goals Versus Threshold, is a stat that attempts to measure a player's value in a given season, in goals. It allows comparisons of players across positions and, in turn, estimations of a player's value in dollars. The statistic is not without faults, however. And while Vollman asks the right question, I'm skeptical of the ease with which he answers. Here's a few issues with the GVT analysis and reasons Fisher might be worth the money to Nashville:

1. The salary, not cap hit, counts--Mike Fisher counts against $4.2 million in cap for the Predators, but his salary for the next two years only equals $7 million ($4M in '11-12, $3M in '12-13). For a team that regularly spends up to the salary cap, the cap hit determines a player's value to the team. A player's worth is determined by what else his cap hit could be used towards. For a team constrained by an internal budget, though, the concern is what else the actual money paid could be put towards. Mike Fisher only needs to be worth $3.5 million next year, or 9.2 GVT.

2. GVT is context independent--The Predators brought Mike Fisher in not to be some offensive-savior, first-line center, but another weapon in Barry Trotz's match-up game. Fisher will be used both to take pressure off Legwand and Goc's lines and take advantage of the match-ups created by Smithson's. The Senators used him in a similar two-way capacity. The Hockey Prospectus article mentions him averaging just 7.9 GVT the past three seasons, but the values varied wildly, often in concert with Fisher's ever-changing role. GVT has no way to account for the quality of a player's teammates or competition. I compared Fisher's GVT with the quality of his teammates, as measured on behindthenet: 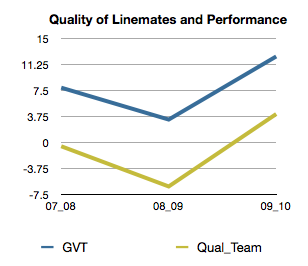 I see a pattern! Here in Nashville, Fisher will likely be the de facto first-line center, and get the best linemates available, maybe Wilson and Hornqvist.

3. Fisher may be a special allowance--Because of the situation, there's a chance ownership is opening up the budget a little bit to get Fisher, the best center available on the trade market. In a similar vein, it's not surprising the Predators had to give up their first in such a drastic seller's market. Ottawa gave a little preference to Nashville, because of Fisher's wishes, and in a purely open market, they probably could have netted more.

4. He fits the power play--Vollman notes that Fisher doesn't fix the Preds' power play, their biggest deficiency, but his Ottawa numbers don't really assume a unit that's built entirely on getting Shea Weber a shooting lane, with traffic in front of the net. If Fisher will go to the net and stand his ground--and by all accounts he will--he'll get some PP time. It's not the best model for a 5v4 unit, but it is what it is.

5. The future is now--I found this passage from the HP article somewhat grating:

At this very moment, there are probably Sens fans calling their friends and relatives in nearby Toronto, wondering why their own local team is actually swapping bad contracts with the Ducks when they can simply dump them on a team so desperate for short term playoff success that they're willing to give up their long term health.

First, a pick in the 20s in a weak draft is not the long-term health of a franchise with a stocked farm system like Nashville's. Secondly, as alluded to before, priority uno right now is extending Weber. And the only impediment to that might be a playoff miss or another first-round exit.

6. Intangibles--This Predators team has seemed a little soft at times. Fisher is a gritty, natural leader. He elevates his game in the playoffs. Ottawa fans love him for a reason. He's here to re-establish the Predators system and identity.

Ultimately, the Fisher contract looks manageable for the Preds. Fisher was supposedly playing through injury earlier this season (another similarity with Leggy), but if he can stay near 100% for the stretch-run and come back fully healthy next season, he should be a solid second-line guy behind Matthew Lombardi. The Predators could graduate several players next year (Klasen, Josi, Blum, Geoffrion, etc.), who along with Spaling and Halischuk, can provide great value and open up the payroll a little.

If an escape from Ottawa and better linemates can bring Fisher to his '09-10 level of performance, he'll be completely worth the money and more. Last year, GVT pegged him as more valuable than Shea Weber, which tells you about both Fisher's ceiling and GVT's credibility.

There's also something to be said about seeing an opportunity and acting on it. We hope Weber, Suter, and Rinne will be this good and around forever, but you never know--all three's contracts will be up in the coming two seasons. Overpaid or not, Fisher gives them a better shot at winning now. There's no harm focusing on the present, when the present has potential.