Does the NHL Hockey Operations group, headed by Colin Campbell, hand out disciplinary suspensions in a fair manner? Is it possible that personal biases and long-standing relationships influence judgments in favor of some teams, and against others?

OK, I know... stop laughing for a minute and hang in there with me. Follow after the jump for an angle on this story which I doubt you've seen before.

When the Nashville Predators ended their long road trip before the NHL All-Star break with a 2-1 loss at Vancouver, a bizarre moment came in the first period, with the Preds on the power play. As Joel Ward battled with Canucks defenseman Keith Ballard, he toppled over Roberto Luongo and into the Vancouver net, where Ballard then decided to try his hand at facial surgery a la Koho:

This should have been a slam-dunk decision to suspend Ballard for at least a game. He's looking directly at Ward, and jabs his stick into Ward's face. The incident to which Terry Crisp refers is Shane O`Brien's well-deserved 2-game suspension for a stick to the face of Florida's Stephen Weiss, which happened a couple weeks ago. In this case, however, Ballard went unpenalized, and the NHL opted not to suspend Ballard either, as he played almost 20 minutes in last night's 4-1 win over Dallas. Surely if Ward had opted to roll around on the ice and require a trainer to come out to attend to some phantom injury, something would have been called, but he went straight to the box instead.

This marks just the latest in a long string of recent events in which an opponent got off scot-free for something a Nashville player would surely have been suspended for. In October you had Marcel Goc getting boarded by Washington's Nicklas Backstrom, resulting in a separated shoulder and weeks on the injured list, then there was Dan Hamhuis getting dangerously run by Marian Hossa during the 2010 playoffs, and of course the Duncan Keith water bottle incident which clearly violated a league rule which called for suspension, but all were let go. One Predators fan summed up the frustration nicely on Twitter:

While I sympathized with the sentiment, I figured that surely these things balance out over time and every team goes through stretches where rough stuff seems to draw suspensions or not.

When I dug through the data*, however, I found something quite different. The table below summarizes the 130 suspensions handed down since the lockout (2005-6 season to present) for on-ice violence between players which required judgment from Hockey Operations. I excluded statutory suspensions, such as the automatic one for taking an Instigator penalty in the last five minutes of a game, etc. I wanted to simply capture instances in which Hockey Operations had to look at an incident and make a call as to whether suspension was justified.

The Perpetrators column shows how many times each team had a player suspended, and the Victims column reflects which team received the hit which resulted in a suspension. So for example, the Rangers have had four players suspended since the lockout for on-ice incidents (Dale Purinton, Ryan Hollweg, and Colton Orr in 2005-6, then Hollweg again in 2007-8) while having been the victims in such incidents 11 times. The table is sorted from highest number of "Victims" to lowest.

The incident I included in which the Predators were the victims came on March 13, 2006, when Scott Parker took shots at Brendan Witt on the Predators' bench by climbing over the partition between the benches. It doesn't quite fit my description of on-ice violence where Hockey Ops had to judge whether a given hit was dirty or not, but I left it in to give them the benefit of the doubt.

Perhaps if I put this in graphical form, comparing these numbers with the year that each team first entered the NHL, and add trend lines... red for the victims and blue for the perps: 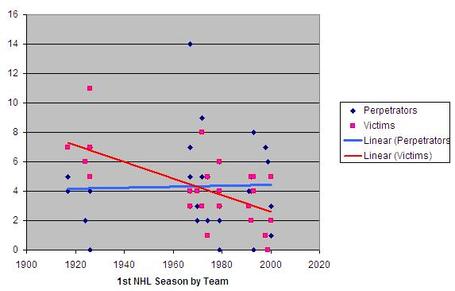 Interesting, isn't it? There's basically no trend at all when it comes to the Perpetrators. But in terms of which teams are on the receiving end of suspendable offenses, the Original Six enjoy a privileged (dare we say protected?) status. Heck, the New York Rangers almost look like the home team for the folks at NHL Headquarters. Wait a minute...

Meanwhile, the folks in Atlanta, Nashville, Tampa, New Jersey and Columbus would certainly appear to have something to complain about. The next time such a fan spins a conspiracy theory that the league doesn't suspend guys who take a run at their players, well, it looks like they're right.