Share All sharing options for: Into the Film Room: Cory Sarich's 3rd period goal against Nashville

This is not how I wanted this feature to return. Preferably, its reincarnation would've come on a dazzling marker by Sergei Kostitsyn or a rocket from Shea Weber. Instead, we are subject to one of the worst brain lapses of the season, in the form of Colin Wilson losing his man at the point.

After the jump, taking a frame-by-frame look at Cory Sarich's goal from last night. 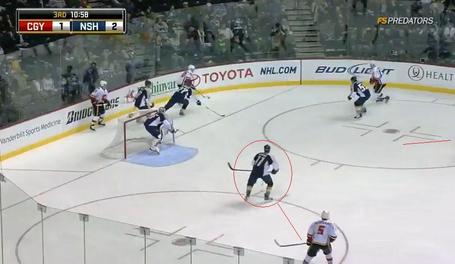 At this point, neither Wilson or Sarich are in the picture. Nashville's defense is nearly perfectly set up here, and it appears as if nothing out of the ordinary is going to happen. Kevin Klein is in the right place, as are Shane O`Brien and Patric Hornqvist.

Despite what it may look like, David Legwand is in exactly the right spot, too - close enough to Mark Giordano to guard against him pinching in (like Sarich is about to do), but also available to close down the middle of the ice should the need arise. 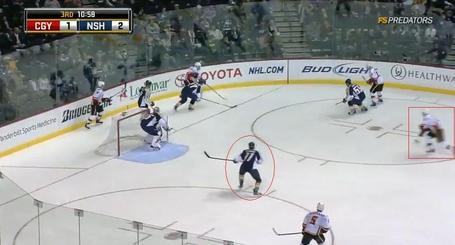 Here's where the problem happens. Wilson (not pictured) loses Sarich, and allows him to race in from the point to receive Tanguay's centering pass. It forces Legwand to make a quick decision - does he move to try and prevent Sarich's shot, or leave Giordano open to receive a pass? When in doubt, you never want to allow a free shot on the goaltender, so Legwand's good positioning allows him to move towards the shooter. 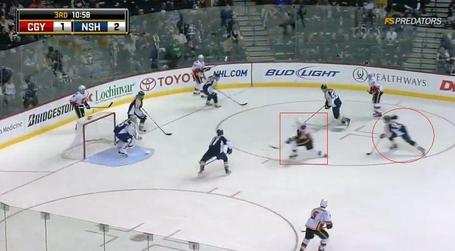 It doesn't make a whole lot of difference, though, given how far behind Wilson is from Sarich. Sarich has plenty of time to receive the pass, pick his shot, and fire before Legwand arrives, all because Wilson fell asleep at the wheel while "watching" the point.

It may look as if Legwand was lax in getting to the play, but that's not really the case - Leggy has to play the sequence up until the breakdown as if Wilson is taking care of his responsibility. 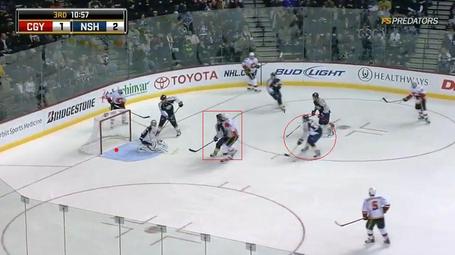 By the time Legwand makes it to Sarich, the puck's in the back of the net, and the Predators have given up another lead, predominantly thanks to Colin Wilson.

Sometimes, goals against are a team effort. Other times, one player's mistake causes everything to go completely wrong. This was one of those times. For a young, talented player like Wilson, defensive responsibility will go a long way to cementing his place on a top line in the NHL.

Full speed video (and if you doubt that Wilson is completely at fault, take a look at his reaction after the goal - immediate admission of guilt):