Share All sharing options for: Into the Film Room: Joel Ward's game winning goal against Minnesota

When things go right for the Nashville Predators, they tend to go really right, and that was evidenced by last night's beatdown of the Minnesota Wild. The team gave full effort, and it showed on the scoreboard.
In last night's win, all eighteen skaters and Pekka Rinne stayed engaged, but at no time was this evidenced more than by Joel Ward's first period goal.
After the jump, breaking down Ward's ninth goal of the season, this one against his former team. 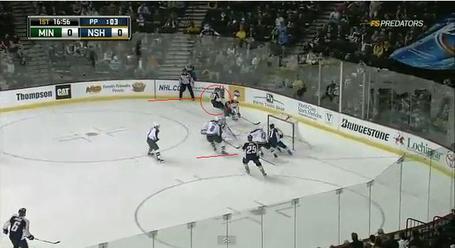 The play begins with Nashville on the power play after Martin Erat has driven to the net. Erat picks up his own rebound, and peels off to the left boards, holding the puck. Even at this early stage, notice Joel Ward in the center of the frame watching Erat and staying behind the defenders. 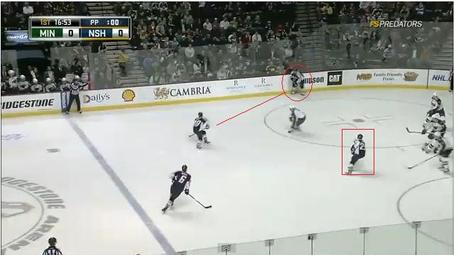 Ward shifts his positioning as Erat does, putting him in position to receive a pass from Erat to tap to Shea Weber, or take a dish from Ryan Suter. Erat sends a pass to Suter, but receives it right back. 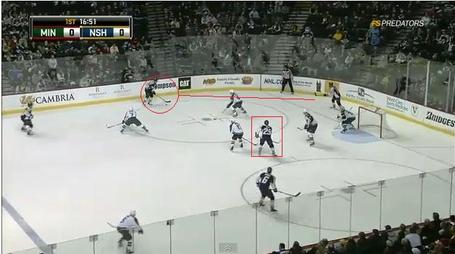 Again, as Erat moves down the boards, Ward moves with him while continuing to stay in position to put the puck on net. You can see David Legwand calling for the puck from behind the net, while Shea Weber is lurking to put home any rebounds that may come available. 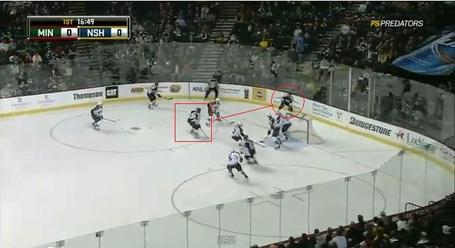 Legwand takes the pass with his head up, and surveys his options. Ward, knowing that Legwand is drawing defenders to him (though the Wild defensemen would've been better served elsewhere), continues to skate backwards into an open position. 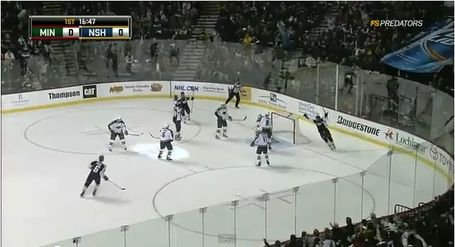 To finish the play, David Legwand makes a nice (albeit simple) pass to Ward, who has kept his stick near the ice the majority of the time. With no defenders in the immediate area, Ward is able to flip the puck up and over the left shoulder of his former teammate Niklas Backstrom.

The goal ended up being the game-winner, and was evidence of what happens when the entire team plays the offensive zone properly - Legwand and Erat played the facilitator roles to a T, while Ward knew exactly where to be on the ice.

Full speed video at the beginning of this highlight clip: