Musing about optimal defense pairings is a favorite pastime of hockey fans all over North America, and Nashville Predators loyalists are no exception. It's usually quite difficult to make a side-by-side comparison of defensive performance, however, as such discussions usually boil down to statements like "remember this play when so-and-so lost his man, he does that all the time", the kind of anecdotal moments that get tossed back and forth but don't really serve to inform the debate. After all, every defenseman makes mistakes and ends up on the wrong side of a highlight-reel play. Over the course of time, however, which duos are consistently giving up more or less dangerous shots?

A big part of the reason I stepped back a few weeks ago from some of the day-to-day work here at OTF is that I have wanted, for a couple years now, to put together a database that would help answer questions like this. While I'm only part of the way to my goal, I've at least got enough here to foster some discussion and give you something to think about as the regular season draws to a close, and we look forward to the 2011 Stanley Cup Playoffs.

Follow after the jump, then, for a detailed view of what kinds of shots each of the Preds' defense pairs are giving up these days...

The Detroit Red Wings are here Saturday afternoon, in what could prove to be a preview of the playoffs, or even a battle for the Central Division title. Take the OTF Discount to save money on Nashville Predators tickets for this, or any other home game!

The following charts show the distribution of even-strength shots faced by the main defense pairs which the Preds are rolling out these days. For purposes of this discussion, "the slot" is defined as that area of the ice 30 feet from the goal line, and 15 feet to either side of the center of the net (shaded in yellow below). 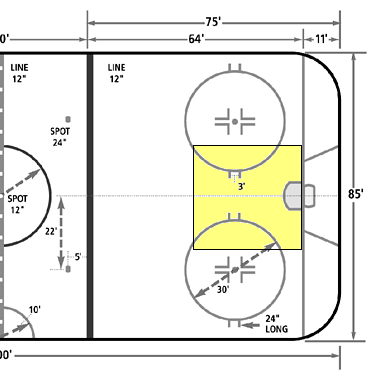 Now, there are a few caveats that I want to toss out here, to help set this information in context:

So how do the various D pairs break down? For each pair we've noted the number of even-strength shots faced, the portion which came from the slot, and the average distance of their sample. To picture how this looks on the ice, pretend that the center of the goal is right at the tick mark for 90 on the horizontal axis: 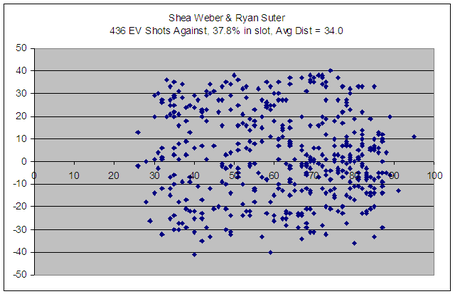 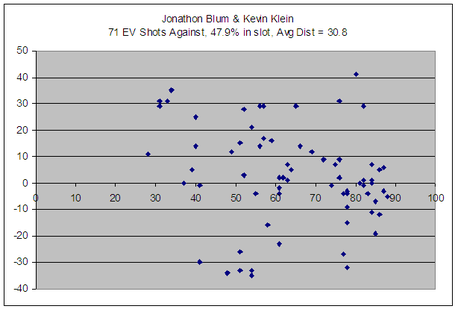 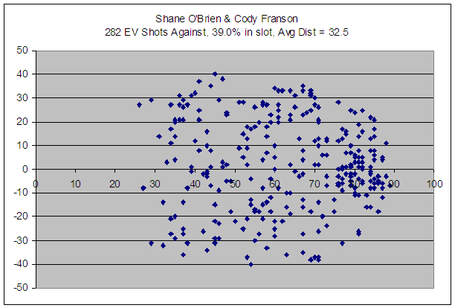 Granted, this is pretty raw stuff, but feel free to chew away. My own initial impression is that I'm not too surprised; Franson & O`Brien's chart looks very similar to Suter & Weber, but of course they're facing much lesser opponents. Meanwhile, Blum & Klein face a moderately tough workload, but suffer from a few factors (lesser quality teammates, Blum still learning the ropes, etc.). Of course, Blum & Klein have only been together a relatively short time, so there are issues with sample size there.

What are your thoughts?