The Predators' Present Run In Context

Share All sharing options for: The Predators' Present Run In Context

Einstein's definition of insanity: doing the same thing over and over again and expecting different results. For the sixth time in seven years the Predators will play in the Stanley Cup playoffs with Barry Trotz behind the bench and David Poile upstairs. If the Nashville loses in the first round for the sixth time, would the Predators be insane not to make big changes?

Like many classic stories, hockey has a likable cast of characters, who engage in various high-tension battles to gain some vaunted prize. Naturally, we tally the battles and call the war. But in hockey, the real story often occurs in board rooms, behind locked doors.

David Poile and company got dealt a hell of hand in 2007. Right after the season that saw their team on the precipice of becoming a long-term superpower in the West, they got the directive to blow the whole thing up. Poile had to negotiate a series of signings and trades with virtually no leverage. Nashville lost its leading scorer, its best defenseman, its captain, and one of the decade's best goaltenders. In return, Poile got the privilege of picking at the bottom of the first round and signing complementary players to over-market contracts to meet the cap floor.

For many teams, that kind of ordeal would mean years of misery. It's on the strength of brilliant drafting, clever strategy, and Mitch Korn, the undisputed king of goalie coaches, that the Predators have remained competitive year after year.

And despite the Predators' lack of playoff success, they are the most successful of the nine modern expansion teams. Only the Wild are close to Nashville's .529 points%. The highs haven't been quite what we hoped, but the lows were never that low, or lasting: 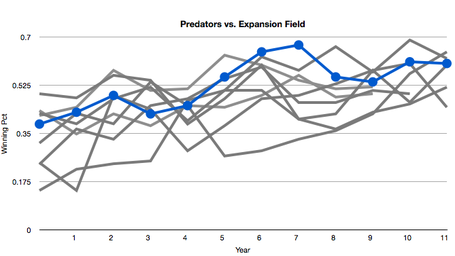 I'm not asking you to temper your enthusiasm for these playoffs; I'm going crazy in anticipation of Wednesday. But unless we stop perpetuating this idea that the Predators have been stuck in second gear for 12 seasons, we won't know how to react to whatever successes and failures are ahead.

Predators fans aren't a naturally negative group--we cheer loudest down a goal. When we bemoan five straight first-round exits, we're not blaming anyone. But the disrespect from the rest of the league makes the want to crash the big party desperate. If you're not going to pay attention the Predators, the Predators will make you pay attention (or so we hope).

Sometimes, though, you can do all the right things and still lose. It's easy to see a series of results and infer a bad process post-hoc, to assign a narrative, in which failure was inevitable. The Predators haven't simply been doing the same thing over and over again and expecting different results. They've been in reach of hockey heaven (you know where the "hockey gods" live), then to hell, and are on the way back.

Maybe they beat the Disney's Los Angeles Mighty DucksTM of Anaheim, maybe they lose. Either way, the core talent is young, the farm system is stocked, and the butts are in the seats. The future is bright, so let's just enjoy the present