Anaheim Ducks General Manager Bob Murray has finally weighed-in on his teams' series against the Predators, and his comments are exactly the kind of even-keeled, tempered analysis you'd expect from a guy who throws chairs at people when his team loses:

Bob Murray has been tight-lipped in this first-round Stanley Cup playoff series against Nashville but the Ducks' boss went on the offensive Monday, accusing the Predators of repeatedly diving and embellishing other plays in order to get calls from the referees.

*The scene from Bob Murray's box in game 2*

Murray: THOSE ARE FALSE TEETH HE KEEPS IN A LITTLE POUCH TAPED TO HIS TONGUE.

Assistant: There isn't even a penalty.

Murray: WHAT ARE YOU TALKING ABOUT? THAT ISN'T A PENALTY!

Assistant: Look at the jumbotron, Erat's missing his front teeth.

Murray: HE LOST THOSE TEETH IN LAST YEAR'S CONFERENCE FINALS!

Assistant: I think you're getting confused Duncan Keith, of the Blackhawks.

Murray: YEA, KEITH! THE BLACKHAWKS ARE DIVING OUT THERE!

Murray: WHAT DID I SAY?

Assistant: I think it's time for your sedative now, sir.

"I've watched enough. First things first. We have to have less passengers. We have too many passengers right now. But when you're playing a game and [there's] a constant stream to the penalty box because these guys are diving left and right ... we have to start diving.

"First things first, we're playing really poorly and this may or may not have anything to do with our losing 2 out of 3. But I think the real problem is two minor incidents that happened at the end of games that were already decided."

"I'd never thought I'd say this to my hockey team. We've got to start diving because it's working. It is working. They're getting power plays because of the diving. I can go through the list of players. You already know who they are. You've seen them. It's ridiculous."

"Uhhh...I can go through the list of players...but I don't think I have to...I mean you guys saw that one and then the other one...you know what I'm talking about."

Here are the Ducks penalties, where a Predator fell (minus boardings):

That's a veritable "constant stream to the penalty box," if I ever saw one. I think Murray's really on to something, identifying that crucial 2.5% of all Ducks' penalty minutes this series, which have lead to a devastating 0 goals for the Predators.

Let's look at the total breakdown for the series:

Good thinking--it's the dead-even special teams that have tipped this series in Nashville's favor. Not the completely lopsided 5on5 play.

Among the other calls that Murray took issue with was Saku Koivu‘s hooking minor on Predators defenseman Jonathon Blum with 2:20 left in Game 3 that forced the Ducks to kill off a penalty, leaving them with scant time to pull goalie Ray Emery for an extra attacker and try to tie the game.

"How do you hook a guy in this game and fall forward?" Murray asked aloud.

Good thing he "asked aloud," so we can answer him. Observe the following picture: 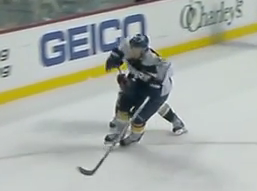 Notice how Koivu's stick blade is wrapped around Jonathon Blum's leg...like a hook! As the picture shows, momentum pushes Blum's upper-body forward, as his legs are taken out from under him. Thus, in the ensuing moments, he falls face-first into the ice.

I'm surprised Murray would complain about Jon Blum, of all people, having his legs taken out from under him. After all, he recently was on the phone with the league office for hours, discussing the bruises on Blums' left foot.

Murray is bothered by the preponderance of whistles in the series.

And it's Nashville that's embellishing.

"They're diving and it's working. I'm sorry but we've got ... it's against my religion to play the game that way. But we're going to have to do it. Gotta do it. Because it's ... I guess it's what the league wants."

"You'd think it was [fewer whistles]. But it seems the other way. And you watch the other games and guys are getting away with things."

Murray, who said he was going to address the team Monday, threw out the suggestion that he may need to start looking at a different type of player for his organization.

"Maybe our scouting, maybe our organization has to be up with the game," he said. "They're over in Europe right now. They're over there in a tournament. And I'm going to say bring me back some divers. Because we're obviously not with the program."

Maybe you should tell them to bring back some defensemen, first.

I've hesitated to portray this series as good vs. bad, but it sure seems that way. Good to know the Ducks' lack of class is an organizational philosophy that starts at the top.