The NHL playoffs are a time when actual hockey should be the leading story, with fantastic drama and end-to-end action coming to the forefront. While that has happened, to some extent, this year's Stanley Cup Playoffs are being marred by questionable hit after questionable hit, and in last night's Game 4 loss by Nashville, a late hit (one for which a hearing is scheduled this afternoon) by Jarkko Ruutu knocked Martin Erat out of the contest.

Ruutu was called for interference on the play, which happened at 4:00 of the first period. An interference call, on Jarrko Ruutu - not so uncommon, right? Perhaps wrong.

Ruutu was a healthy scratch in Game 3, and was re-inserted into the lineup tonight, which was not entirely unexpected. The catch? He played Wade Belak-like minutes, registering just 10 shifts and 5:41 of ice time after averaging around 9:00 in the regular season.

According to timeonice.com, Ruutu took just one shift against Martin Erat, a thirty second one early in the second period. He stepped onto the ice for the shift at 3:30 of the second period, and it ended with the interference call at 4:00. His next shift would be 8:28 later, and he only skated two shifts in the third period, even when the game was well in hand for the Ducks.

What does it all mean? Who knows, but for a player with Ruutu's history, on a team like the Ducks, the optics aren't pretty, to say the least. Then again, this is playoff hockey - skill players get "targeted", and Erat probably could've done a better job of avoiding contact.

As for the hit itself, I haven't been able to find any video that conclusively proves Ruutu hit Erat in the head. What we do know, though, is that Erat was hit well after the puck was played (thus the interference call): 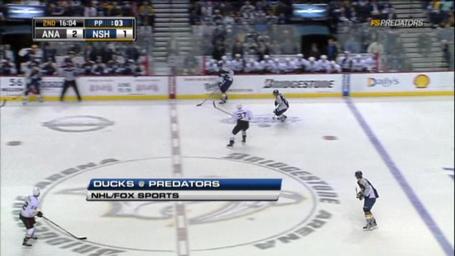 As you can see above (click on the photo to make it larger), Ruutu has a pretty significant distance between himself and Erat, and the puck is already on the stick of Cody Franson. In some cases, a player could have trouble pulling up to avoid the hit, but it's pretty clear this is not one of those cases.

At this point, Ruutu lifts his arms somewhat (doesn't leave his feet), and it looks like his shoulder may come into contact with Erat's head: 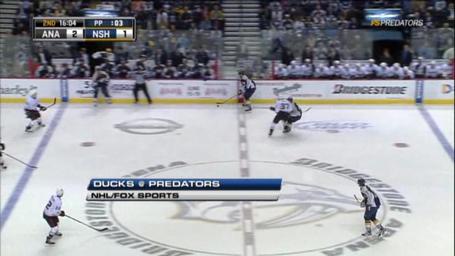 That's about the best I could do with the video available, so again, it's inconclusive as to whether or not this was a head shot, but one thing's clear - the hit was completely unnecessary relative to the play, and the two minute penalty was fair considering the information available to the referees at the time of the call.

I can't say one way or the other whether or not it deserves a suspension (my initial reaction would be to say no), but Ruutu  will be subject to a disciplinary hearing, via Nick Kypreos:

Full speed video was a little scarce on this one, but I've included what was available. Stick tap to @martinihockey on Twitter for finding these for me.

And another, via SportsNet:

So what do you think? Was Jarkko Ruutu deliberately looking to take someone out of the game, and/or does this hit deserve a second look from the NHL? Perhaps more importantly, though, who should take Erat's place in the lineup if he can't play - J.P. Dumont, Colin Wilson, or even Cal O`Reilly?