As we know, getting a good deal on Nashville Predators tickets can sometimes be a hassle if you're not already a season-ticket holder or have a connection for a discount, and even then, once the playoffs get rolling, even those deals become more scarce. Today, OTF is launching a new partnership with TiqIQ which will make it easier to find the best priced tickets in various sections, by aggregating various ticket retailers' prices and connecting them with you. 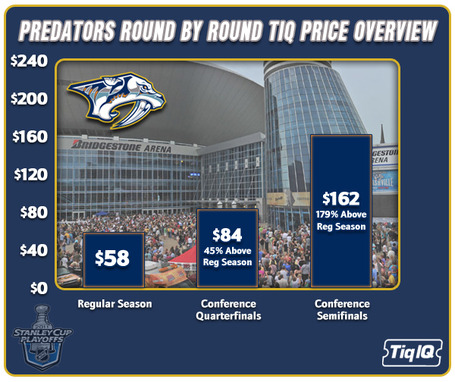 As you may have noticed, there is a new tab along the top navigation bar called "Tickets." By clicking on that tab, you'll be taken to the On The Forecheck ticket center where you'll be able to find seats for every Nashville Predators game (including playoffs!), both road and away (for some reason the away tickets aren't working right now, but I'm assured that will be fixed). The real magic occurs when you pick a particular game and see what's available.

What TiqIQ essentially does is serve as an aggregator for other ticket retailers such as StubHub and eBay, showing you a range of ticket location and prices. There's even a color-coded system that tells you if a ticket is a good or bad deal. I would suggest playing around with a little, but you'll find that on the first screen you'll see a chart that shows you the historic prices of tickets for that game and whether they've been going up or down, as well as show you what TiqIQ thinks are the best deals. To dig a little deeper, just click on the game and you'll see a complete seating chart that displays are the available tickets, how many are available and how much they cost. 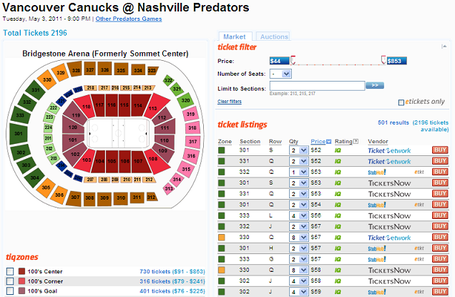 As part of this partnership, you'll see occasional tweets (1 or 2 per day) on my Twitter account (@Forechecker) alerting you to particularly good deals, and you should know that I receive a small commission on each sale. My hope is that this partnership will be seen as adding value to the site, as it should provide you with a realistic picture of how the market looks for a given game and help you find the best priced tickets. SB Nation first began working with TiqIQ back in November and so far it has been well received.

So head on over to the ticket center and look around at what's available for Game 3 & 4 of the Western Conference Semifinals vs. Vancouver, which will take place Tuesday and Thursday.

By all means, if you have any questions, feel free to comment below or email me at the.forechecker@gmail.com. Thanks to Jeremiah at Sounder at Heart for the scoop on how TiqIQ works.