At this morning's skate prior to the home finale against Columbus, the Nashville chapter of the Professional Hockey Writers Association launched a new tradition with the presentation of a Media Recognition Award, and this year, the recipient is Predators defenseman Shane O`Brien. Despite joining the team just before the start of the season via trade from Vancouver, Shane has fit right in, and seems to be very comfortable making time for local media whether it's calling in for a radio segment, giving quotes after a practice or game, etc. He's definitely one of those guys who seems comfortable getting past the tired cliches that many hockey players rely upon.

I can see why the players like having him in the room, as well - O'Brien is one of those guys who is very outgoing and has a good time out on the ice. When it comes to the shootout competition at the end of practice, you won't find a bigger hot dog out there than #55 after a score.

Follow after the jump for a look at the plaque itself, which features the likeness of a member of the Preds' broadcast crew...

There are still just a few tickets left for tonight's game against Columbus, so take the OTF Discount to save money on your Nashville Predators tickets! 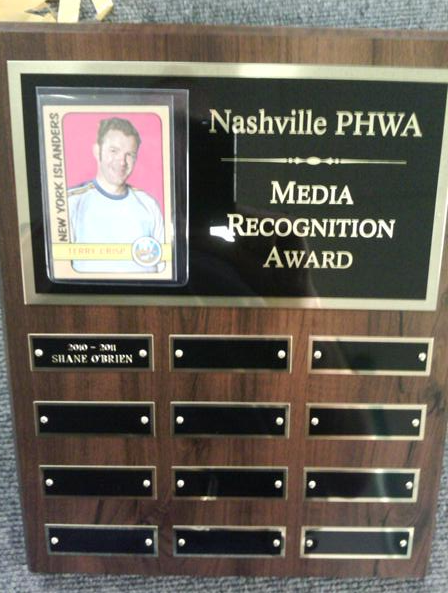 Thanks to @bubbabrine on Twitter for passing this along.

It makes you start to wonder which players will fill out this plaque in the years ahead. Patric Hornqvist, if he can keep the potty mouth under control? Sergei Kostitsyn, as his English improves?

And to celebrate Shane's award, let's harken back to one of the highlight plays of the season, back on December 13 against the Islanders...