Who is the Greater Arena Troll: the Predators Gnome or the Canucks Green Men?

Share All sharing options for: Who is the Greater Arena Troll: the Predators Gnome or the Canucks Green Men?

The Nashville-Vancouver semi-final series has predictably been so far a battle of two Vezina-nominated goalies. Pekka Rinne versus Roberto Luongo, however, pales in comparison to another game-within-the-game about to unfold. This series will pit against each other two prolific in-house irritants: the Vancouver "Green Men" and the Nashville Gnome.

Vancouver's Green Men are a well-known phenomenon. As the story goes, two British Columbia Institute of Technology students got the idea to dress themselves entirely in green spandex, after seeing a similar costume on the show "It's Always Sunny in Philadelphia." They sit outside the visitor's penalty box and try to get in the heads of opposing players.

But what have they ever accomplished? Their biggest "victory" to date was getting inside the head of Predators' check-line winger Dave Scatchard in a regular-season game in 2009-10. Scatchard laughed at them after he took a cross-checking penalty, during a scoreless first. With the Predators losing in the late second period, however, Scatchard got called for goalie interference. Flustered, he covered the penalty box camera with a towel. The Predators sent him back to the Milwaukee Admirals the next day. Of course, the Green Men took credit.

All Predators fans know, however, that Scatchard, a temporary call-up, was ticketed for Milwaukee anyway. The Predator Gnome, on the other hand, gets the big guns. HFBoards used Joetimo tells the tale:

On opening night I was blessed with the opportunity to have the bench seats. During this time, we had purchased a Predators garden gnome and set it facing the Anaheim bench. Now, as you can imagine it certainly got looks. Corry Perry in particular couldn't take his eyes off the garden gnome. Might I suggest we invest in a garden gnome or two and set them up in the bench seats so that the gnome can continue to haunt Mr. Corry "cheapshot" Perry?

This is the what transpired in the box...

Perry got so creeped out that when he got back to the bench, he took one look at the gnome and he slammed the door as hard as he could to try to knock the gnome off and then when that didn't work, he refused to sit there again for the entire game. He literally motioned for someone else on his line to sit there instead of him.

Perry was held pointless in Game 6 in Nashville and, as they say, "the rest is history."

What is the origin of the Gnome? The current gnome is the standard Predators model, autographed by the team in silver sharpie. The earliest gnome sighting I can remember, however, came on February 27th, the day Jonathon Blum scored his first NHL goal against the Columbus Blue Jackets.

The Blue Jackets thought they had scored, but a review called a sure-goal back, allowing the Predators to win. And behind the time-keeper's bench, disrupting the judgement of the referee, was the proto-gnome: 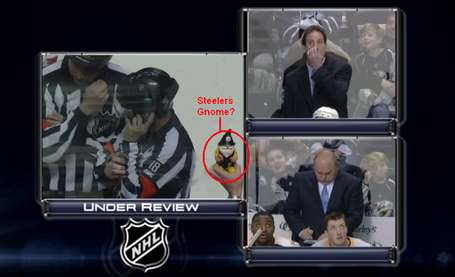 It was a Pittsburgh Steelers gnome, a crude early model, but it got the job done.

Since we're a stas-oriented site, let's breakdown the numbers here:

In yesterday's game, the Green Men went after Jordin Tooto with this little number: