I don't know about you, but I think EA Sports' NHL games are the best sports games out there. We'll be doing a series of posts this summer about the upcoming NHL '12 video game, starting with yesterday's release of the first screenshot.

Follow after the jump for the shot and more... 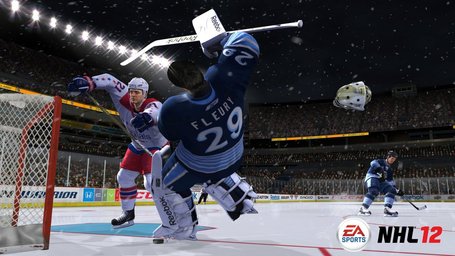 You can click on the image to view full size, or even click here for an extremely blow-up version from Operation Sports.

Right off the bat, I can spot a couple of new features in that picture:

Some other features I'd like to see in next year's game would be some presentation modifications as far as the arenas are concerned. It would be awesome to see them add all of the arenas into the game, and make them true-to-life replicas like in just about every other EA franchise.

Another would be some custom crowd chants for certain players like they added this year in Madden '11. How cool would it be to hear Vancouver fans yell "Luuuuu...." when Luongo makes a save, or Tootoo whistles when 22 is on the ice?

Do you see any thing else in the screen shot EA released yesterday?

What other features would you like to see in the game?