This game is starting to look better and better every day. If you were on the fence about getting NHL '12 from the first screenshot, then there should be no question after seeing yesterday's releases. Follow after the jump for some more screen shots and a video sneak peak. 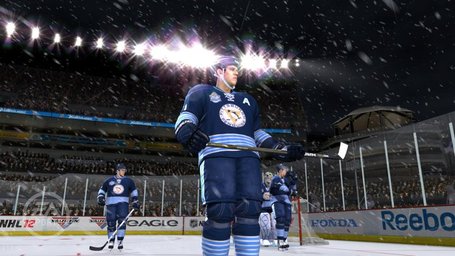 The Winter Classic is coming to NHL '12, but as speculated, it will only be available at Heinz Field. Via EA Sports NHL's Facebook page:

NHL 12 allows you to play at this venue with your favorite teams and battle for supremacy while battling hostile weather conditions. 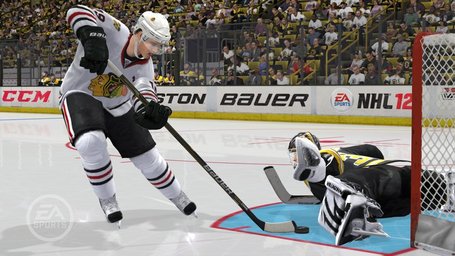 "Dynamic goalies", as EA has named them, will be a big upgrade in this year's game. Via IGN, who got a sneak peak at the NHL '12 demo:

Another interesting facet of the tangled mess around the crease that added to NHL 12's refined approach is how standard players and goaltenders react to one another. It's possible to get wrapped up with a goaltender while out in front of the net. Likewise, taking a hard drive to the net only to run into a defenseman may send you careening into the goaltender, who will in turn take a fall, perhaps sending the net off of the pegs. If the action is heated enough and the collision violent enough, the goaltender may even lose his helmet as play comes to a stop. Whether or not you'll take an ill-timed interference penalty for such contact is another story entirely. And such contact could potentially lead to a first-person fight in which the goaltender takes part.

One thing that bothered me about '11 and '10 was when you'd have 2 or 3 guys charging the net, and your netminder would just stand there, and the forwards would either bounce off the goalie, or stop right in front of the net and slide the puck in. This year, however, it looks like that'll be different, with collisions in front, nets coming off the pegs, and yes, even goalie fights. Speaking of collisions.... 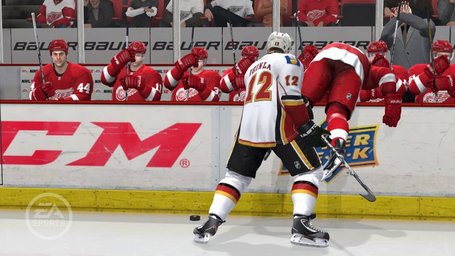 If you thought the physics engine in '11 was cool, EA has cranked it up a notch for NHL '12. This year you'll be able to hit guys over the boards, knock their helmets off, and even break the boards. Now, this is a cool feature, I just hope it doesn't happen too often. Like every game, stuff like this can get overdone really easily (see: fighting for the fumble in Madden), but if done right just makes the game that much more dynamic. 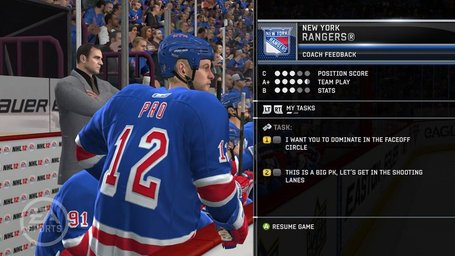 Be A Pro has always been one of my favorite modes, and it'll only get better this year. It looks like they'll be adding player-specific objectives in this one such as blocking shots, winning faceoffs, etc.... to earn your ice time. I just hope they don't get too picky and, despite your 2 goal 2 assist night, send you back down to the minors because you only blocked 2 shots. Like the glass breaking, this has the potential to be a great addition if it's not overdone. 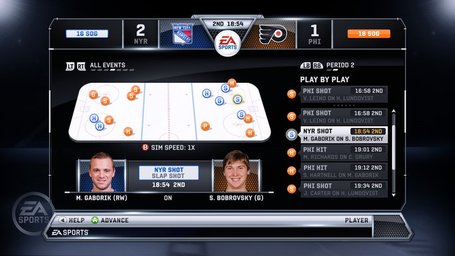 Finally, this "Action Tracker" looks pretty cool. Like NHL Gamecenter, you'll be able to see more advanced statistics, like shot selection and faceoff percentages, at different spots on the ice.

Again, this looks like a killer game that I will definitely be buying this year. I can't wait to battle in front of the net with Patric Hornqvist, run guys into the boards with Shea Weber, and maybe even have Rinne drop the gloves every now and then. If you want to pre-order the game, which is due out in September, you can here.

And a video for your viewing enjoyment. I particularly like the 1:00 mark.