With the season now over, it's time to take a look back and examine each player's individual performance. We'll briefly break it down, and then offer a letter grade for the year. It's report cards, Nashville Predators-style, from Blum to Wilson. Next up: Anders "The Giant" Lindback.

Today's special guest blogger is Rachel Addison, Preds superfan and one of the founders of Hockey Tonk Angels, a group of lady hockey fans who not only provide a forum for female puckheads to band together, but support the Nashville Predators every chance they get. You can find her talking Preds hockey on Twitter at @racheladdison.

The Skinny: With Dan Ellis gone, Predators fans were unsure of who would be #2 to our undisputed front-man Pekka Rinne. Luckily, our brilliant coaches & European scouts had something up their sleeves, in the form of a 22-year old, 6'6" Gävle, Sweden native, named Anders Lindbäck. Our new 13-foot goalie tandem was to function a little differently than we had seen years prior, as this season Rinne was our #1, and Lindbäck would fill the role as a stable, dependable back-up, who wasn't competing for the top spot. To support our newest Predator, a campaign was started dubbing him "Anders the Giant" complete with a logo and t-shirts that would benefit the Predators Foundation. [Sidenote: I made the logo the exact same day that he got his tooth fixed, rendering his brand new design slightly outdated. "Maybe next you can make me a shirt with my tooth fixed!" he said with a chuckle.] 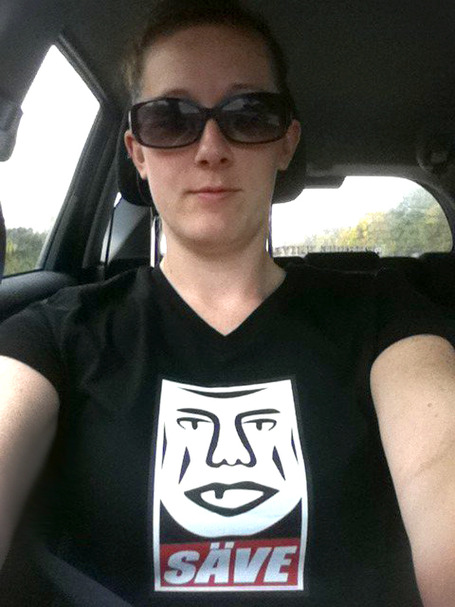 Nobody knew much about this endearing young chap right away, as he completely skipped the usual step of spending time on the Milwaukee Admirals roster, and had never even played in North America. We soon learned that just a few months before the 2008 NHL Draft, he was diagnosed with Adult-onset Still's Disease, a rare form of inflamatory arthritis that requires a daily injection. For a goaltender I cannot imagine a worse affliction. The Performance: In the 3rd period of the season opener against Anaheim our beloved Pekka was injured after a collision with Troy Bodie & Francis Bouillon, and Anders had zero minutes to get nervous as he stepped out onto the ice for his sudden, unexpected NHL debut. He did a great job filling in for those first few games, and then again in December when Rinne re-aggravated his knee injury, requiring surgery that would keep him out of the lineup for several weeks. That's when Lindbäck stepped up big time; so much so that a few of us were worried that history might repeat itself, and we would be back to watching 2 goalies compete for #1. Luckily, when Rinne returned there was no question as to who owned that spot, and as it was meant to be, Lindbäck saw very little ice time from that point on. Aside from providing the occasional relief for a tired Finn, he made himself comfortable watching the rest of the season from the bench alongside his teammates.

When Lindbäck did play, you almost didn't notice the change, because his playing style as well as his physical presence is so similar to Rinne's (an added bonus for the rest of the team, who wouldn't have to adjust how they played if one was swapped out for the other). He played a total of 22 regular season games for the Preds -- starting 18 of those -- and would get credit for 11 wins and 5 losses. He stopped 527/576 shots for a .915 save %, 2.60 GAA, and posted an incredible 2 shutouts (back-to-back, no less) all in his first year in the NHL. He was sent to Milwaukee for a brief stint in late February; a smart move by the coaching staff to give him some more ice time and to keep him from getting rusty, as the Playoffs were fast approaching. Lindbäck only played 4 games for the Admirals, posting the same save percentage, with 2 wins and 2 losses. He would see 13 minutes of ice time in the Playoffs for the Preds -- stopping all 9 shots he faced -- when Rinne was pulled in Game 4 against Anaheim after uncharacteristically letting in 6 goals.The Grade: It's hard to grade a player who, when things are going right, is not seeing much ice time. However, when asked to step up and fulfill his duties as the reliable back-up, he delivered. This young, rookie goaltender fresh out of the Swedish Elite League did an absolutely stellar job, and he shows a lot of promise for years to come. Personally I would love to keep this gentle giant in our system for as long as we possibly can. A-