Nashville's 3-2 overtime loss hurt. The Canucks came into our barn and, for the most part, dictated the flow of play, outshooting the Predators 47-30 and winning the faceoff battles 43-35. However, Vancouver's two power play goals came off of close calls that will be discussed on talk shows and around the water cooler for the rest of the series. While these two calls certainly were not the only reason the Canucks won the game, they are worth a closer look...

The first call was a high stick on Jerred Smithson at the end of the first period. Here is a .gif that Chris found of the play, but we'll look at a few frames individually. 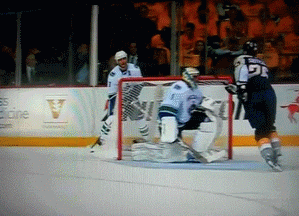 Smithson's stick is level with Luongo's head, and he probably should have gotten the stick a bit higher when going across the net like that. But did he actually make contact? 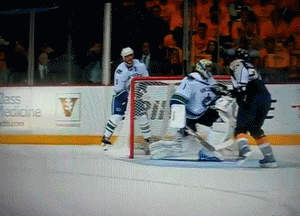 Here, Smithson's stick is already a good foot away from Luongo's head, but Luongo hasn't even reacted yet. Now, I'm no physics nerd, (ok, yes I am) but one has to think that if the stick had struck Luongo's head, it would be falling back by now. 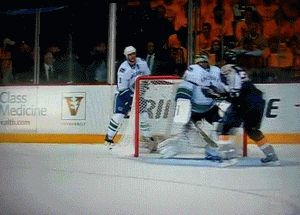 And here we see Luongo's head finally go back, after Smithson's stick is well past it.

It would appear Smithson's stick never makes contact with Luongo's mask and that the Canadian netminder embellished the play to draw the penalty. And if the NHL deems that to be the case, Luongo could possibly be looking at a fine from the league.

While Smithson's high stick led to Vancouver's first goal, the play that will be debated the most was the hooking call on Shea Weber at 10:05 in the overtime period that led to Ryan Kesler's game-winner. Hooking is defined as "the act of using the stick in a manner that enables a player or goalkeeper to restrain an opponent." But is that what Weber was doing? Puck Daddy has video of the call here, and Pete and Terry break take a look the call here, but we'll look at a few frames once again. 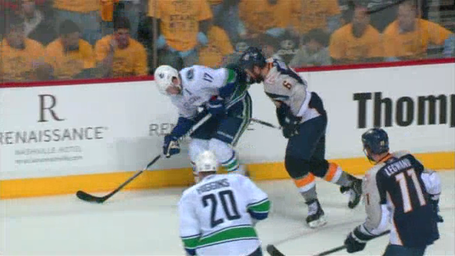 Weber and Kesler get tied up along the boards fighting for a loose puck, when it appears that Kesler holds Weber's stick under his arm, or "chicken wings" it as Trotz called it last night. Once Weber realizes what's happened, he starts pushing Kesler, trying to get him to let go of the stick. I think the key here is that Weber only has one hand on his stick when the call is made. I imagine it would be pretty difficult to "restrain an opponent" with only one hand on the stick. 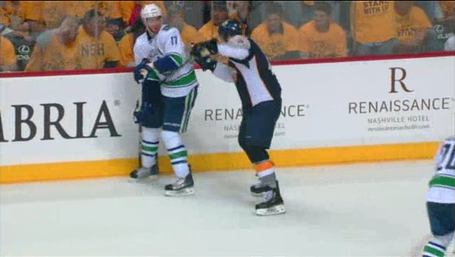 Here is a better view, and you can clearly see that Kesler has the stick wedged between his side and under arm. By this time, Weber has two hands on his stick, but the puck has moved on, and Weber is only trying to get possession of his stick back from Kesler.

If the ref is going to make a call in that situation, he could have gone either way with holding on Kesler, or the hook on Weber. However, in an overtime playoff game, with so much on the line, the referee probably should have just let this one go. If Kesler had been out on a breakaway, it would be a different story, but the puck was against the boards away from the net and Weber was not impeding on a real scoring chance.

In the end, however, Nashville was outplayed, particularly from the second period on, and these two penalties did not decide the game. In fact, Nashville probably got away with a few no-calls of their own. But in the NHL playoffs you have to capitalize when given the opportunity and that's exactly what Vancouver did.