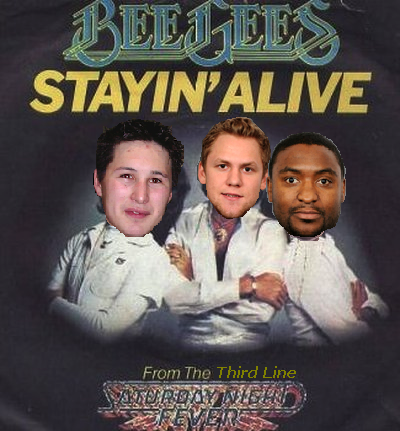 Despite what the national media might have told you, it ain't over 'till it's over. The Nashville Predators won their first playoff game, while facing elimination, tonight. We can (and surely will) debate this offseason whether this squad is the best Predators team ever. But even the most ardent Kimmo Timonen lovers would admit this bunch is the most resilient. There will be at least one more hockey game this season in Nashville, Tennessee, an opportunity to perhaps exorcise some lingering Chicago-series demons.

Now to the game at hand: the first period was ugly. After a smart takeaway by Joel Ward, David Legwand scored his second short-handed goal of this series. But that lead didn't last--Raffi Torres scored 2 minutes later, after a Jonathon Blum turnover in the slot. Ryan Kelser scored on a similar defensive breakdown at 15:06. The entire fourth line and Shea Weber were caught deep, springing Mason Raymond and Ryan Kesler on a 2-on-1 against Suter. With Weber ostensibly back on Kesler, Suter made a move on Raymond. But Kesler still managed to score around Shea.

The Predators got the score tied again, just :51 seconds into the second, when David Legwand, from his backhand, behind the net, and without looking, banked a puck off Alexander Edler and past Luongo. I do not think he meant to do that. The 2-2 score carried into the third, despite numerous chances at both ends.

And then there was the Joel show. In the first six minutes of the period, Joel Ward struck twice, once from Tootoo, another time from Fisher. He added a hat trick bid, about 11 minutes in, with a breakaway shorthanded, but couldn't beat Luongo.

Both Ward goals highlighted Nashville's need to get to the front of the net and take shots from those high-percentage areas. Despite a pretty good forecheck all series, it's mostly been for naught, as the Preds have kept turning the puck back over before getting a shot. If you're going to average just 25 shots a game, you've got to make them count. Sergei Kostitsyn's near-goal, that Lapierre saved with a diving stick, was another good example of going to the net.

Ryan Kesler scored again at 16:14, but it was too little, too late for the Canucks. The series comes home Monday.

Video highlights and other observations after the jump.