The Nashville Predators broke out their new logos for the 2011-12 season today at Bridgestone Arena (and simultaneously in Las Vegas) to their credentialed bloggers, introducing a streamlined, simpler design that maintains the traditional "Pred head", as well as a new secondary logo which aims to tie the team in more closely with the city of Nashville, and the state of Tennessee as a whole.

This, in anticipation of seeing the team's new road jerseys at this weekend's NHL Draft, and the new home uni's, which are to debut at the Skate of the Union event sometime in mid-July.

Image from the Nashville Predators

The process, as described by Executive Vice President Chris Parker, involved a number of different focus groups and parties in the development of these new marks, which should start appearing on hats, t-shirts, and other merchandise in a matter of weeks.

Update: Nashville Predators t-shirts with the new logo are now available at some of the online retailers.

Here are some of the highlights of the discussion, which should answer some questions, and open up a whole lot more:

Part of the intent was to update the look of the team, given the new era that they're moving into both on and off the ice. A secondary factor, however, was also to reduce the complexity of the design from a marketing perspective. The old "Pred head" logo, for example, had a greater variety of colors, with orange highlights that aren't seen anywhere else - those kinds of extraneous details make a logo harder to produce across a variety of media (print, signage, hats, t-shirts, etc.), and this new look should be much easier to market, particularly outside of Nashville.

So what do you think? Personally, I like what I see here, particularly the guitar pick. I haven't been a big fan of the current 3rd jerseys, so won't miss them. It will be interesting to watch how this conversation moves ahead as we start to see the new uniforms over the next few weeks...

For reference, I've included the previous version of the logo: 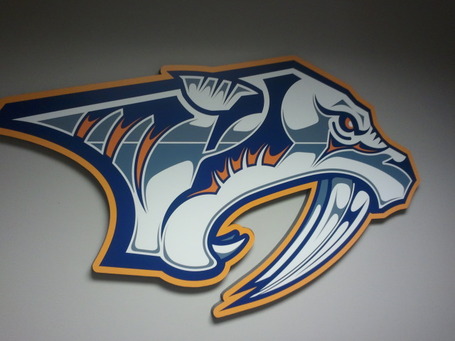