Share All sharing options for: Moneyball & The Nashville Predators

For those of us who enjoy analyzing the game of hockey at a deeper level than the standard box score or game recap provides, Moneyball

is an inspirational classic, and the movie adaptation of Michael Lewis' best-selling book hits theaters this week. It tells the tale of how Billy Beane, general manager of baseball's Oakland A's, defied convention to assemble a winning team in spite of tremendous financial disadvantages.

In the NHL, if there's any team which serves as a consistent exemplar of Moneyball principles, it has to be David Poile's Nashville Predators, a franchise which has made the playoffs 6 out of the last 7 years despite usually operating on the lower end of the NHL's salary lists. Also much like those A's, the Preds have been able to punch above their weight and consistently give themselves a shot in the post-season, but have failed so far to capture the ultimate prize.

Let's take a look at a few of those principles as they're put into action in Nashville...

One caveat that we do need to start with up-front is that under the current CBA, the NHL's spread between the haves and have-nots is much narrower than in Major League Baseball, either during the period covered by Moneyball or since. The following chart outlines the spread between the minimum and maximum payrolls in both MLB and the NHL, in the past and the current season: 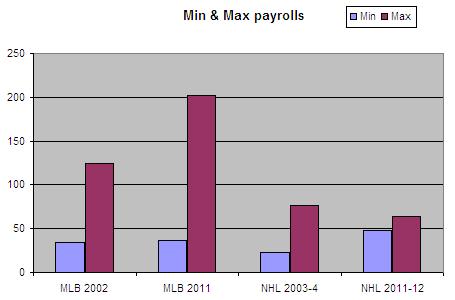 Yes, there are opportunities in the NHL through mechanisms like LTIR and stashing salaries in Europe or the AHL for big-market teams to push the envelope to some extent. The range in today's league, however, is quite narrow. There's still an imperative to make the best use of an organization's resources, of course, but when people portray the NHL as some kind of David vs. Goliath struggle, it's worth not just comparing it to baseball, but remembering how things were before the Great Lockout. So... the opening lines of this trailer don't quite apply, but they certainly sound good:

The modern NHL is often talked about as a young man's game, and with players able to hit unrestricted free agency after only 7 years of service, the trend has been to get the most value out of young guys still on their first or second pro contract.

The Preds work this angle consistently, with the bulk of the roster (including all the goalies and almost all of the defense) being homegrown drafted & developed players. On Opening Night, we could see 14 or more of the 20 players dressing for that game be Nashville draftees. Leveraging young players who have all come up through the same system has helped David Poile continually rank among the league's most efficient general managers when results are compared against dollars spent.

The link to Moneyball is pretty clear - one of the major points of emphasis in Beane's approach was to focus on acquiring talent via MLB's amateur draft, in particular going for college players who would be closer to contributing at the major league level, even if their potential upside was not as high as other, more notable prospects. The hockey equivalent here is the way the Predators bring along their draftees slowly, usually having them complete their junior hockey or collegiate careers before turning pro (and even then, a tutelage in Milwaukee is the normal route to Nashville). An added benefit from this long-term developmental approach is that as injuries occur during the course of the season, players can be called up from Milwaukee and fit in relatively seamlessly, not only in terms of the team system that they already know, but due to the familiarity they have with many of the players from seasons past.

Strategy #2 - A Focus on Team Defense

We all know what drives up a player's price on the NHL market - points, points, points. Especially when it comes to unrestricted free agency, offensive producers consistently draw the most attention from big-spending GM's (just look at the list of top salary cap hits coming up this season, and try to find more than a handful of guys whose primary talent is defensive hockey).

Put simply, you can have two teams which are roughly even in Goals For & Goals Against. One is a high-flying team which also gives up a boatload of goals, the other a stingy defensive squad that also struggles to score. In today's NHL, all those goal-scorers end up costing a whole bunch more (just look at the Calgary Flames). That's why the foundation of the "Predator Way" is a team-wide focus on defensive responsibilities. Now one can argue whether that foundation is sufficient to win a Stanley Cup (I don't believe it is), but what it does provide is a structure within which offensive talent can be supported.

While the Predators sat on the sidelines as the big-money free agents like Brad Richards worked the market, two bargain acquisitions have the potential to make an impact on the team's fortunes this season, just as Sergei Kostitsyn did in 2010-2011. When I ran a list of free agent forwards who could help boost Nashville's attack, two of the top 6 candidates were Niclas Bergfors and Kyle Wilson, and sure enough, they both ended up signing with the Predators for less than $600,000 each per season.

At those prices, there is little downside risk if the signings don't work out, but the potential upside is large. Both Bergfors and Wilson racked up points at a considerable pace last season (in 5-on-5 they would have ranked 7th & 8th among Pred forwards with more than 30 GP), and Bergfors in particular seems like a guy who fell victim to a criminally cold shooting stretch during his time in Florida, and is likely to score goals more consistently going forward.

For a team whose coaches are constantly imploring their forwards to shoot the puck more, Bergfors is a trigger-happy offensive jolt. He does have drawbacks in the physical and defensive aspects of the game, but at this price, the Preds aren't looking for an all-around star; instead they're getting a specialist who should hopefully contribute on the power play and as a complementary scoring winger. Wilson, on the other hand, has potential to create some offense in a supporting role, perhaps on the 4th line or as an injury replacement higher up the depth chart. For a team like Nashville without a dominant top line, it will be important to get contributions up and down the lineup.

The point here isn't just to acquire players with potential who happen to come cheaply - instead, these players are targeted for specific roles, in which their individual strengths can be maximized, and their weaknesses covered up or minimized.

A similar case could be made on defense for pickups like Tyler Sloan and Jack Hillen; both have NHL experience, and signed two-way contracts for $650,000 each at the major league level. They provide experience and support that could prove essential, even in a 3rd-pair role, if some of the exciting prospects like Roman Josi, Mattias Ekholm, or Ryan Ellis have difficulty performing in Nashville.

Zigging while the rest of the NHL Zags

Ultimately, the Moneyball approach is all about pragmatism and opportunism - putting the focus on actual results, and looking for instances where the conventional wisdom over- or under-values various assets. That approach doesn't necessarily have to involve the use of advanced statistics, but analytics can be used to identify areas of opportunity. For example, such tools can be used to monitor the state of the NHL as it changes over the course of multiple seasons - because those winning characteristics which are undervalued today, may not be tomorrow.