Niclas Bergfors represents the latest example of what's becoming a consistent trend in recent Nashville Predators history - signing an erstwhile hot prospect to a bargain contract, after his previous team decided to part ways. Last season, it was Sergei Kostitsyn, who ended up leading the Preds in scoring after Montreal traded him to Nashville for a bag of pucks. Can Bergfors repeat the feat and deliver maximum value for minimum wage?

After having come to Atlanta in the Ilya Kovalchuk trade late in the 2009-2010 season, Bergfors got off to a decent but not overwhelming start with the Thrashers, with 11 goals and 18 assists through 52 games. At the trading deadline, he was shipped to Florida along with Patrick Rissmiller for Radek Dvorak and a 5th-round pick, but things didn't click with the Panthers. He added just one goal and 6 assists in the final 20 games, and was allowed by Florida to hit the open market as a free agent.

When it comes to the individual data, what we see here is a reasonably productive offensive player who fires the puck on net at an above-average pace. He doesn't take very many penalties (the low figure there is shaded green because that's the one measure where low is good), and while he doesn't draw many from his opponents, either, the net result is positive.

The numbers here are particularly encouraging; his basic Corsi (the balance of Total Shots For & Against while he was on the ice in 5-on-5 play) were nicely positive, and with a medium workload in terms of Zone Starts (negative means lots of extra faceoffs in the defensive end, positive are extras in the offensive side), once we adjust his Corsi for those Zone Starts, he stands out even further as a guy who generally pushes play in the right direction.

The fact that his team suffered from a low shooting percentage during his ice time can actually be a reason for optimism; there's little reason to believe that an individual player can have much influence on team shooting percentage, so there's an argument to be made that poor puck luck undermined his basic offensive stats to some extent.

Bergfors generally has received 2nd-unit power play time in his career so far, and has performed reasonably well there; one would think that over the course of the season he may be able to earn a steady PP job with the Preds, who have struggled in recent years with the man advantage. He has received no significant penalty-killing work in the last two seasons.

Here's a look at where Bergfors fired even-strength shots from last season. Blue represents light frequency, yellow is medium, red is the RED HOT DANGER ZONE! Sorry, just got a little excited there: 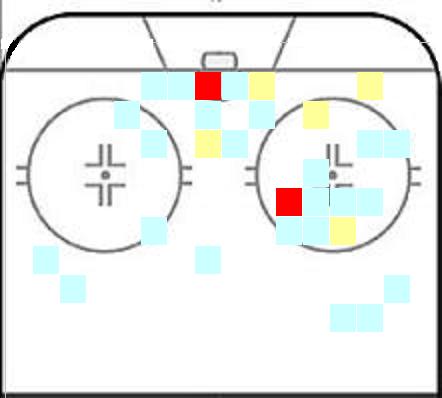 Back in December of last year, Jeremy at Section303 saw the discussion about Bergfors hitting the trade market in Atlanta and started banging the drum to bring him to Nashville:

The question remains though: why is he on the trade block already? Is it an attitude issue? Is he too offensive minded? Is it purely a "his contract is expiring" thing? Typically, with players that would be rentals, their clubs like to get the most out of them before they ship them out at the trade deadline. While that still may be the case in Atlanta, you have to admit, it’s pretty early to be hearing active trade rumors surrounding a player.

So, is this the "finisher" the Predators have been looking for? Yes, he’s not a true "finisher" but, let’s face it, on this team, he’d be as close as it gets.

I'm one of those guys who's always yelling "Shoot" during a 2-on-1, and Bergfors teases the pass to perfection here:

The positive: Bergfors finds a home on the power play and alongside one of Nashville's playmakers to become the younger version of what Steve Sullivan had been for the last few years, and hits the 20-goal mark once again.

The negative: He listed BBQ as his favorite food in the Preds' media guide, and is now playing in Nashville. Hopefully he doesn't outweigh Dustin Byfuglien by Christmas.