After a late-season debut that drew rave reviews, the first member of Nashville's latest generation of home-grown defensemen has to prove that his play down the stretch and into the playoffs was just a taste of things to come.

Follow after the jump as we dig into the prospects for Blum's sophomore campaign...

After flying below the radar for much of last season in Milwaukee, Blum was recalled to Nashville on February 22nd, after a hit by Shane Doan put Ryan Suter on the shelf for a while. It took him only two games to earn the trust of the Predators front office, however, as just three days later the team traded Alexander Sulzer for a conditional draft pick, and an NHL roster spot was his. He smoothly settled into the 2nd pair alongside Kevin Klein, and played between 16 and 19 minutes per game most nights, displaying his heady, puck-moving style of hockey.

While Francis Bouillon never returned to action down the stretch and into the playoffs, Blum filled in admirably and rewarded fans who were beginning to wonder if and when that 2007 1st-round draft pick would pay off.

The guy's only played 23 regular season games, it's a tad early for milestones. Well, he's only 2 points away from 10 all-time!

I'd really caution against reading too much into these numbers, as 23 games is a relatively small sample size, so it's not surprising to see a number of extreme values here. One goal either way can send those Goals/60 and Shoot % numbers all over the place.

Again, small sample size caution here, but there are two warning signs I'd keep an eye out for. Those Corsi numbers are pretty poor, and could be a reflection of him getting thrown into the deep end of the NHL pool so quickly. Ideally, he'd be working his way into the league in a lesser role. That Team Shooting % also looks like a stroke of good fortune (it was the 3rd-highest among all players with 20+ GP in either of the last two seasons, and no, you can't convince me that Blum has a demonstrable skill which leads to a significantly higher team shooting percentage while he's on the ice).

Blum pretty much immediately went to work on the 2nd PP unit, where he did manage to score one of his three goals. His flexibility to play the left or right side will surely help him maintain such a role this season, and we'll be very interested to see if he can make an impact there.

He was only a marginal contributor to the penalty kill, averaging 28 seconds per game.

Since he only had 18 shots on goal last season, we shouldn't be surprised to see so few areas show up on his even-strength shot chart. I am encouraged, however, with his possible propensity to come off the boards and fire from the middle of the ice, which is a more dangerous scoring area. 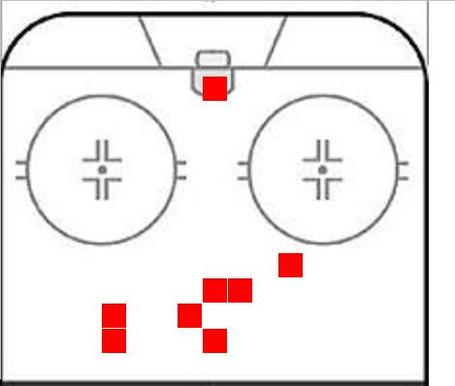 Back in March of 2010, Eric Kent from Admirals Short Shifts contributed this piece on Blum's progress towards the NHL. It's worth noting that this year's media guide lists him at 190 pounds.

Thursday night, Blum played in his 72nd game this season for Milwaukee - matching a season high in games played. From here on out, his body will be taking an unprecedented toll.

"It is a long season," admitted Blum. "It's all about taking care of your body away from the rink - that's what makes you a better pro." Blum is also facing the difficult decision of resting for the extra games, or continuing to practice to get better.

"It kind of goes both ways. You want to make sure you're not playing out of your league. After practice, staying after shooting pucks or working on little explosive quickness stuff that you need to do to get better. I spend about five to ten minutes after practice each day working on those little things."

Blum's offensive abilities have never been questioned. The scouting report on the defenseman expressed concern over his slight build. While playing in Vancouver, Blum was listed at 6'1", 165 pounds. Today, he's a little over 180, and has shown little durability concerns. That continues to be an area that Blum focuses on in Milwaukee.

How about a winning goal at home against Detroit on a Saturday night?

The positive: Locks down a job on the 2nd pair at even strength and the power play, plays 20 minutes a night, and develops into a right-handed version of Dan Hamhuis (and trust me, that's high praise). Since he only played 23 games last season, he's still eligible to win the Calder Trophy for the NHL's top rookie. Frankly, I'm banking on the Positive Outlook here, as I took Blum in the last round of one of my fantasy hockey leagues this year!

The negative: Second-year players often run into difficulty (just look at Tyler Myers in Buffalo), and it's by no means certain that throwing young guys into prominent roles will rescue Nashville's power play from the doldrums. Plus, the stats geek in me says that Blum's winning streak in the Credit Card Game is doomed! Doomed, I tell you!