Francis Bouillon 2011-2012 Season Preview - Can The Cube Get Back Into Shape?

Share All sharing options for: Francis Bouillon 2011-2012 Season Preview - Can The Cube Get Back Into Shape?

"The Cube" is a hockey player's hockey player, a widely respected and admired figure whose stature within the team goes far beyond his contributions on the ice. After missing almost the entire second half of last season and all of training camp so far with post-concussion symptoms, however, Preds fans have to wonder if, and when, they'll see Francis Bouillon suit up once again.

Signed by Nashville as a free agent in September 2009

Follow after the jump as we break down his impact on the Nashville blueline once he's ready for duty...

Bouillon filled a number of roles for the Preds during the first half of the season - when Ryan Suter went down with a knee injury, he stepped up to play alongside Shea Weber, and logged more time on the power play. When the lineup was healthy, he dropped back with Kevin Klein, and chipped in with the penalty kill. While not a game-changer by any means, Bouillon is the sort of jack-of-all-trades veteran that a team relies on to survive the travails of the long regular season.

We all know Frankie's not here to put the puck in the net.

All in all, these aren't bad numbers; once you take those Zone Starts into consideration (he starts in the defensive zone quite a bit), he's only mildly underwater (I had expected worse, actually). Not everyone can tip the ice like Suter & Weber, so as long as the 2nd and 3rd pairings don't get totally hammered, the Preds can still prosper.

Given the lack of options on the left side, Bouillon received about a minute and a half per game over the last two years on the Nashville power play, after barely getting a sniff there in Montreal previously. He also works the second pair on the penalty kill, where he's been one of the Preds' more effective performers.

Here's a look at where The Cube fired shots from at Even Strength last season (yellow is light frequency, red is higher frequency areas). Yup, that's a left defenseman for you: 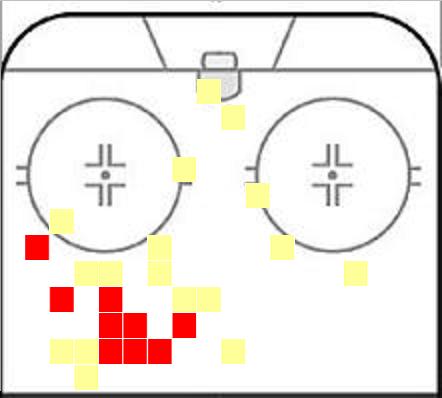 Here's what I wrote when Bouillon first came to the Preds back in 2009:

What I'll be very interested to see are Bouillon's puck-moving abilities. If people are looking for a Greg Zanon replacement, Bouillon certainly does not appear to be it (just 55 Blocked Shots last season). However, if Bouillon can jump-start the forwards to at least a moderate extent, he might turn out to be a more effective overall player than Zanon was.

An ongoing criticism I've had of Zanon is that his high Blocked Shots totals belie the fact that when he's on the ice, it's a virtual shooting gallery in the defensive zone. His lack of offensive ability just meant that once he went down to block a shot and clear the puck, the other team was just going to gather it in and come back again. If Bouillon can settle things down and just make a decent first pass on a consistent basis, there's good reason to believe that the 2nd pairing can be much more effective this season.

How about Frankie putting a dagger in the heart of the Panthers in overtime, back in March of 2010?

The Positive: He's cleared to play some time during the first month of the season and provides support as a stay-at-home/PK specialist to allow one of the young prospects to find their NHL legs in a more sheltered role.

The Negative: He's only played more than 74 games once in his career, and that doesn't look like it's going to change in 2011-2012. Jack Hillen and Tyler Sloan look a lot like contingency acquisitions in case The Cube can't go.