With the greatest offensive skill set among the Nashville Predators forwards, Martin Erat looks at times like a point-per-game talent, capable of carrying the team scoring load for stretches with his speed, hands, and underrated puck-protection ability. Injury concerns always seem to flare up at some point along the way, however, and have prevented him from ever breaking the 60-point mark in a single season. As he enters the highest-paid season of his 7-year contract, is this the year for a Marty Party?

Follow after the jump as we break down Marty's game...

Back spasms hobbled Erat during the early stages last season, as he recorded just two goals and four assists over the first two months, before busting open with 5 assists across two games in early December, which launched him to a finish which included 44 points over his final 48 games. What's especially notable is that after that early funk, his longest scoreless stretch the rest of the way was just 3 games. By season's end, he tied Sergei Kostitsyn for the team scoring lead with 50 points, despite only suiting up for 64 contests, and surely playing at less than 100% in many of those.

During the playoffs, Marty took a beating - he had teeth knocked out against Anaheim, and got knocked silly by Tuomo Ruutu, causing him to miss the final two games of that opening series. He came back to face Vancouver, however, and chipped in 3 assists in the 6-game loss.

Erat definitely fits in as a solid offensive performer, and last season, even helped create some extra power plays by drawing penalties.

This is where Marty's two-way prowess really shines through. His basic Corsi numbers are already good, but when you throw in the fact that he takes extra defensive zone starts, they positively shine. And it's not like he faces cushy opponents, either, he generally matches up with other Top 6 forwards. By any measure, he helps create offensive chances for the Preds while also taking care of his own end of the ice.

For anyone who doubts whether the Predators really boast any top-line caliber forwards, I'd argue that Erat would qualify - his only real problem is a lack of durability.

Whatever Nashville's power play woes have been, you really can't blame Erat for them. Last season he led the Preds in goal-scoring and point-producing rates in 5-on-4 play, and was a team leader in 2009-2010 as well. He works the first PP unit and has enjoyed 2:33 and 2:46 of PP ice time per game the last two seasons. If anything, those numbers need to go up, as 50 forwards around the league got 3:15 or more of power play work nightly last year. The Predators, however, usually don't load up a few key individuals with that much PP time. Maybe the should?

Then again, he could help out more on the penalty kill, too; in his 64 games, with a little over a minute of PK action per game, Erat was only on the ice for 2 4-on-5 goals against all season, the lowest such rate on the team.

Here's a look at where Erat's Even Strength shots came from last season. Blue areas are relatively low frequency, yellow are moderate, and red are higher-frequency zones: 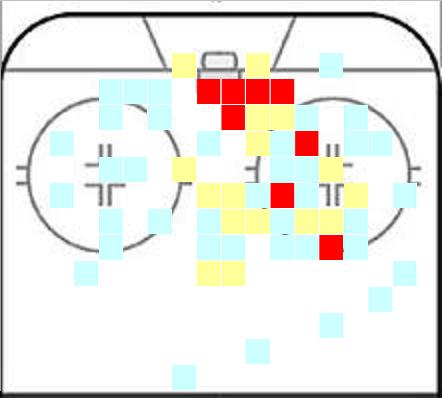 Was this really from 3 years ago? It seems like yesterday...

Let's keep the Wayback Machine cranking, and review Marty's goals from the 2005-2006 season:

The Positive: He holds up over the course of 82 games and finally delivers that 70-point season that David Poile has mused about in the past.

The Negative: He spends weeks watching from the press box nursing various injuries, and other nights leaving you wondering if he should be there. In the last seven seasons, every time he's ended up within the remarkably narrow range of 49-57 points, so why bet against that now?