Share All sharing options for: Mike Fisher 2011-2012 Season Preview - Can He Shoulder The Load?

The addition of Mike Fisher prior to the 2011 Trade Deadline was like a shot in the arm for a Predators team which had been decimated down the middle due to injury. It turns that Fish wasn't exactly 100% himself, however, as he battled through upper-body issues over the final months of the season and underwent shoulder surgery shortly after the playoff loss to Vancouver.

While he continues his rehab efforts, the question becomes not only when might he return to the lineup, but in the long run, can he still effectively play his typically rough & tumble style and still remain effective for a playoff run?

Follow on as we examine Fisher's two-way game and see where he fits into the Preds' plans for the upcoming season...

The Ottawa Senators were circling the toilet bowl when Fisher was brought to Nashville by David Poile; on their way to a last-place finish in the Northeast Division under doomed head coach Cory Clouston, the Sens were a team in turmoil, despite Fisher's workmanlike efforts. Once with the Preds, he went right to work taking on tough competition, and while he chipped in just 5 goals and 7 assists in 27 regular season games as a Predator, his presence took some of the defensive burden off of David Legwand. In the 37 games before Fisher showed up, Legwand put up 19 points, but in the 27 games after, he recorded 22.

In the playoffs, Fisher's line with Patric Hornqvist and Sergei Kostitsyn played a large role in defeating the Anaheim Ducks, as Fish scored 3 goals and added 3 assists in the 6-game win. Against Vancouver, however, the highly-touted matchup with Ryan Kesler turned into a one-sided affair, as Kesler dominated and Fisher mustered just one assist in six games.

2010-2011 was a pretty underwhelming season offensively for Fish, before and after his trade to Nashville. His assist totals in particular dropped off a cliff from the previous campaign.

Like I said, last season wasn't one of Fisher's best, and the possession stats point that out pretty clearly.

Fish is used to getting a steady diet of power play time, and that should continue in Nashville, where there isn't a clear incumbent holding down the top spot. He's typically been a moderate point-producer there for Ottawa, but that probably represents a step up from what the Preds have enjoyed, so he should provide a small boost.

With the Senators, he also spent upwards of 2:00 per game penalty killing, but given the Preds' depth in that area already, his burden on that end should be lessened somewhat, maybe cut in half.

And here's where Fisher fired shots from last season at Even Strength. Blue areas are relatively low frequency, yellow are moderate, and red are higher-frequency zones: 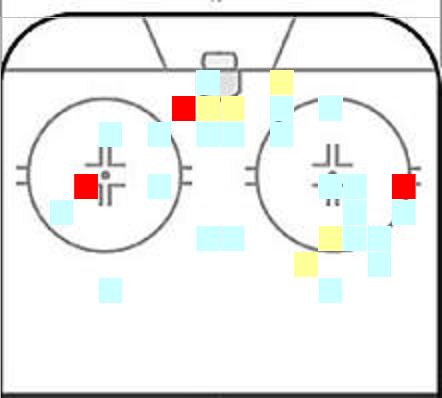 Back in 2009 when Mike Fisher got engaged to Carrie Underwood, the notion that he might come to Nashville seemed crazy, right?

First off, Fisher is a terrific hockey player; not necessarily a 1st-line center, but as a 3-time 20 goal scorer, well on his way to a 4th with 15 goals already, there's little doubt that he'd make a fine addition in Nashville. He does get dinged up quite a bit, but that comes with the up-tempo, energetic game he plays. As a center, he could fit in between Dumont & Hornqvist in the short term, and might make a long-term replacement once Jason Arnott hangs up the skates, whenever that happens.

Of course, that talent comes at a price. He makes $4 million during this and the next two seasons, along with $3 million in 2012-13. That level of pay, while significant, isn't out of line with the core group that the Predators rely upon. Right now there are a host of players making between $3 million and $5.25 million. Since Jason Arnott, J.P. Dumont, David Legwand and Martin Erat are all covered by no-trade clauses in their contracts, you can bet that none of those players would be likely to head the other way in a theoretical deal.

Granted, this isn't to say that anything will (or even should) happen this season on this front; but it's an idea to keep in mind each summer, as that's when it's most reasonable for teams to make deals for players under long-term contracts like his.

And if Ms. Underwood ends up being viewed as a villain in Ottawa for swiping away one of their top young stars - well, that's just part of being a good Preds fan, Carrie. You do what it takes to help the team!

Perhaps an under-appreciated aspect of Fish's game is a wicked wrist shot...

The Positive: He's ready to play sometime within the next few weeks and enjoys a productive campaign, topping the 40-point mark while matching up against top opponents and sparking the power play to life.

The Negative: That shoulder issue plagues him all season long, limiting his availability and effectiveness, and requiring a battlefield promotion for one of the younger centers in the organization.