"Boomer" got down to business in his 20-game NHL debut last spring, producing our #1 Moment of the Regular Season by racking up a badly-needed hat trick in Buffalo to keep the Preds' playoff hopes alive. Local fans had waited a long time to see Nashville's first homegrown hockey talent hit the NHL stage, and Blake Geoffrion didn't disappoint. As he attempts to make the Preds Opening Night roster for the first time, the question becomes, can he take the next step and become an every-night presence at the NHL level?

Follow after the jump as we dig into that question...

Blake spent the first half of the year with Milwaukee, and really turned things on in January, winning consecutive AHL Player of the Week honors during the last week of that month and the first of February. Given all the injuries suffered within the forward ranks in Nashville, it seemed only a matter of time before he got the call from the big leagues, and sure enough, on February 25th he and Matt Halischuk were both recalled from the Admirals.

Eased in with a 4th-line role, Geoffrion started contributing immediately, with goals in games at Edmonton and Vancouver in his first week, and the aforementioned hatty in March. During the playoffs, he played in all 12 contests and racked up two assists in limited ice time, one of them another memorable moment which led to a highlight-reel goal for Steve Sullivan against the Ducks.

Um, it's a little early for anything here.

WARNING! WARNING! WARNING! I almost didn't even include this section because of Blake's 20 games played offering such a small sample size. We need to temper the expectations built up from his scoring, however, as those rates are, dare I say, fluky.

The sample size is a bit larger here (Corsi-based events are roughly 10 times more common than goal-based ones), but still too small to draw major conclusions from. I would say that he needs to prove himself regularly against other 3rd- and 4th-liners for a good stretch before penciling him into a larger role.

Blake didn't get a sniff of special teams ice time with the Preds, but during his last three seasons at Wisconsin, half or more of his goals every year came on the power play. While he's not slated for a major role there this season, I could see him making an impact down the road as a secondary PP option.

Don't get too excited by all the red zones here, again, given the small sample size, pretty much any place that Blake took a shot from at Even Strength showed up as a hot spot: 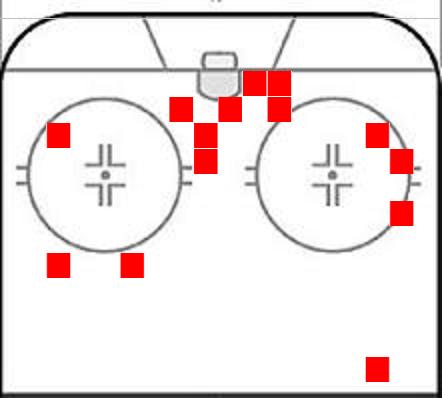 I will say, however, that perhaps the thing that impresses me most about Geoffrion as a scorer is that when he's in the prime scoring area, he's usually prepared to immediately fire pucks on net which come his way, he doesn't hesitate at all by receiving a pass and handling the puck at all before shooting. At this level, every extra 10th of a second makes a difference in whether or not an opposing goalie can get into position to make a save, and I could see Blake earning a living between the circles. Physically, he also seems quite comfortably banging bodies out there with the best of them.

Some hack wrote this back in 2006, when the Predators drafted Geoffrion:

This completely slipped off my radar on Saturday, but one significant pick that was made in the second round was by the Nashville Predators when they selected the grandson of Montreal Canadiens great Bernie 'Boom-Boom' Geoffrion.

The amazing thing is that Blake Geoffrion is actually a local kid, a product of the Nashville Youth Hockey League. Who knew Tennessee produced NHL-calibre prospects?

"We had been tracking Blake all year, and not just because he was from Nashville," Fenton said. "We all knew it would be a great deal marketing-wise, but we watched his progress. He made great improvements. We liked the type of game he plays, his intensity and he had the intangibles that we look for in a Predators player. When we went to Europe in April and saw him play we were all sold on him."

Geoffrion was the Predators first pick of the draft after they'd traded the club's first-overall pick for Brendan Witt at the trade deadline. He's also the first-ever prospect to come from the Nashville area.

"When we first came to Nashville, we'd always hoped that the day would come that we would be drafting a player - and players - from Nashville," Poile said.

"We are very pleased and proud to select the first player from Nashville."

Is this the beginning of the sunbelt invasion? I know from watching the Western Hockey League closely that California is making strong inroads with prospects there, but I'm quite sure Geoffrion's the first prospect I can remember coming from far down in the American south.

You can't go wrong with that stunning hat trick in Buffalo...

The Positive: He recovers cleanly from his current wrist injury and earns a regular 4th-line job with the Preds along with some time on the power play, hitting the 15 goal mark.

The Negative: Stuck in a battle for NHL jobs with fellow young prospects, spends the season on the road back and forth between Nashville & Milwaukee.