Almost treated as an afterthought by many fans when he was acquired in the Jason Arnott trade, Matt Halischuk made a name for himself with a tireless, straight-ahead game, and some timely offensive contributions that turned the tide in Nashville's favor.

With a new two-year, one-way contract in his back pocket, what does the future hold in Nashville for "Hustlechuk"?

After coming over from New Jersey in the Jason Arnott trade in the summer of 2010, Halischuk began 2010-2011 with the Milwaukee Admirals, getting his first callup to Nashville in mid-January. After a couple trips back-and-forth, he was brought up on February 25th along with Blake Geoffrion, and stuck in the lineup the rest of the way, including all 12 playoff contests (including, as we'll see below, a pretty memorable moment against Vancouver).

He drew praise from the coaching staff for playing a very simple, north-south type of game, chipping the puck ahead and crashing the net in the offensive zone. Fans appreciated the all-out effort he displayed on the ice, and willingness to pay a price along the boards just to move the puck in the right direction.

As with Blake Geoffrion, small sample sizes must be considered here.

Again, a small sample size here, but not as small as the mostly goal-driven statistics noted in the individual numbers. The concern is not only how poor the basic Corsi number looks, but when you set it within context (the positive zone starts means he got extra opportunities in the offensive end), the Adjusted Corsi looks even worse. That, combined with an eye-popping Team Shooting Percentage while he was on the ice, 3rd-best among forwards with at least 20 GP and 5 minutes of 5-on-5 play per game, scream "fluke" to me. The basic flow of play was steeply negative during Halischuk's ice time, but thanks to some good puck luck, the Goals For & Against worked out OK. That's a dicey proposition to rely upon going forward.

Unless, that is, you're comfortable seeing him nestled in with the likes of Sidney Crosby, Ales Hemsky, Ryan Getzlaf, and Bobby Ryan already, and believe that he has some special talent that will consistently drive a high Team Shooting Percentage.

Halischuk didn't get any significant special teams work with the Preds last season, and will likely need to prove himself as a PK option in order to stick with Nashville.

Here's where he shot from at Even Strength last season: 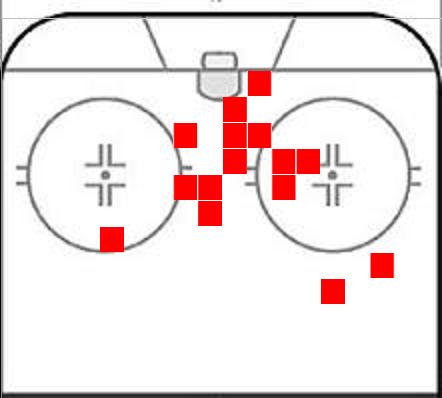 You definitely have to like the spread here, even if it does cover only a handful of data. All but 3 of those points are in what you'd consider as prime scoring real estate.

Halischuk lived out the dream of millions, scoring the gold medal-winning goal in overtime for Team Canada at the 2008 World Junior Championship. Here, he talks about it shortly afterward with Hockey Night In Canada:

Of course, he carried forward that knack for the OT winner into the NHL last spring:

The Positive: That fortuitous knack for piling up points continues, and he chips in 10-15 goals as a depth winger while playing most of the season.

The Negative: He ends up chasing pucks in his own end of the ice too often, and gets passed on the depth chart by one of the other prospects.