When asked recently what the Nashville Predators need to do as a team to challenge powerhouses like Detroit and Chicago for the Central Division title, captain Shea Weber had a simple, two-word answer: "Beat them."

Tonight at Bridgestone Arena, the Preds get just such a chance as they welcome in the Chicago Blackhawks for their first visit of the season. The team that knocked Nashville out of the 2010 playoffs is once again among the NHL's best, and the Predators get two cracks at them here in the final days before the All-Star Break, as they make a trip up to the United Center on Tuesday.

Tonight's game may well be the hottest ticket of the season so far - check out the resale market!

While the Hawks are a pretty terrific 5-on-5 team, their Achilles Heel (the penalty kill) matches up quite nicely with Nashville's strength (the power play), so look at those special teams battles to play an especially key role tonight.

The Blackhawks are once again positioned to contend for the Central Division title and/or first place in the Westernc Conference, led up front by no-names such as Marian Hossa, Jonathon Toews, and Patrick Kanen (Patrick Sharp is also having a strong season, but is out with an injury). After a four-game stumble to start the new year, they've cranked it back up again, going 5-0-1 in their last six heading into tonight's game.

Perhaps most impressively, they've racked up an impressive record so far while getting sub-par goaltending. Corey Crawford has not exactly torn it up:

The gang from Second City Hockey is making the road trip to come down for this one, so with any luck we'll have a dramatic show for the home fans like on January 15, 2011, when a large contingent of Blackhawks fans were on hand to see the Preds pull off a late-game comeback:

For two periods, things looked bleak in Smashville. A huge crowd of Chicago fans had infiltrated Bridgestone Arena, cheering on as the Blackhawks manhandled the Preds, posting a 2-0 lead heading into the third. In one of the most remarkable games of this season, however, it all turned around from there forward. A Jerred Smithsongoal sparked the crowd, leading to the first "TV timeout standing ovation" of the season.

Then, in a moment that no Nashville Predators fan who was in attendance will ever forget, Shea Weber blasted home the tying goal just seconds afterward, silencing the Chicago rowdies. Pekka Rinne fought off some dangerous chances down the stretch and particularly in overtime, then stuffed all three Chicago shooters to secure the shootout victory.

Welcome to Smashville, guys. Have a good time while you're here, but leave the two points at Bridgestone.

The Preds are riding what may be their strongest sustained period of play all season long, with a 9-2-0 record in their last 11. The lineup uncertainty for tonight centers on the new addition to the team, Brandon Yip, who was claimed off waivers from Colorado on Thursday. He's expected to suit up, so which forward does he bump out of the lineup? Gabriel Bourque or Craig Smith are the likeliest candidates, so stayed tuned later this morning to see if word comes out of the morning skate.

Just to hazard a guess, I'm going to say Smith might watch tonight. Bourque has proved to be the feisty, high-energy winger we'd hoped for, while Smith's production has dropped off the map over the last several weeks (one goal & one assist in his last 14 games). One can wonder if his confidence and aggressiveness are slipping a bit as the long grind of the NHL season wears on him, but as you can see below he's still generating shots for himself at pretty much the same rate as he did earlier this season: 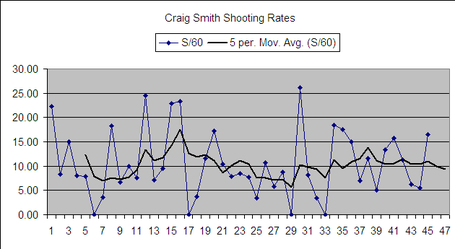 The data points here represent the number of Shots On Goal that Smith took, prorated to 60 minutes of hockey. The black line is a 5-game moving average, to smooth out some of the noise and give a sense of the trend.

Now I'd agree by the "eyeball test" that Smith hasn't seemed like quite the same player that we saw back in October and November, and we shouldn't be entirely surprised at that. The NHL schedule is much more arduous than the college one (practice all week, then play Friday & Saturday), so a mid-season funk is hardly surprising. While it's nice to see him get some recognition as part of the rookie group at the upcoming All-Star Weekend, perhaps it would be better for him to get those days off and let his mind and body rest up for the chase to the playoffs.

So look at it this way, if Smith does get scratched tonight, there could be a bright side. It could be the break from competition that the rookie needs to get his game back on track.