How a local hockey mom made Mike Fisher's Christmas

Share All sharing options for: How a local hockey mom made Mike Fisher's Christmas

No, not because he makes millions of dollars playing hockey (although that's pretty cool).

No, not because he's married to Carrie Underwood. Well, actually it turns out that does have something to do with it, but there's a hockey mom involved here, too...

One of the great conundrums which any husband can face is what the heck he should get his wife for Christmas. After all, one wrong choice can lead to a lifetime of reminders (trust me, I still hear about a camera-less cell phone I bought for Mrs. Forechecker many, many years ago).

Mike, however, was fortunate enough to have a Christmas gift idea teed right up for him, as his famous wife found something she fell for at Laurel Leaf Gallery in Leiper's Fork, a painting of a cow by local artist Carol Demumbrum named "Harry": 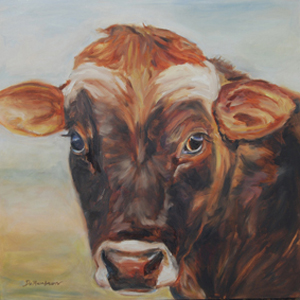 Hey Mr. Poile, need some beef on the blueline?

Carrie Underwood had been in the gallery a few weeks before and fell in love with this painting, so her husband Mike Fisher came back in and bought it for her. My sons were so excited to hear Mike purchased, he is also a big celebrity in our household because he plays for the Nashville Predator hockey team.

There's a good reason why Mike's a celebrity in her household, because besides being a gifted artist who grew up on a local dairy farm, Carol is a hockey mom, with a son who plays in the Junior Predators program. She offers up her personal artwork through the Laurel Leaf Gallery and her own Etsy page.

Get "Harry" On Your Wall

In addition, there's a Facebook page for her art, and if you head over there and "Like" the page, you're entered in a giveaway she's running of a print of Harry (hurry up, the drawing is on Saturday, January 28). So if you're lucky, you can have something on your wall just like Mike Fisher and Carrie Underwood have on theirs.