How NHL Coaches Utilize Their Players

Share All sharing options for: How NHL Coaches Utilize Their Players

A question which has been rattling around in my head quite a bit lately is that of how NHL coaches utilize their forwards and defense, and how to get a handle on how this varies for teams across the league. Do individuals focus on matching up against particular opponents, or deploying specialists based on where the next faceoff is taking place?

It's important stuff, because as I've looked through the last few seasons of data, there's a pretty strong, consistent link between where a player starts his shift (offensive or defensive zone) and how the flow of Shots For & Against goes. What we have yet to find is any such direct link with the level of competition that player is facing while he's out there. Intuitively, we understand that lining up against Pavel Datsyuk is an entirely different thing than playing David Steckel, but the effect is harder to isolate.

So how do various coaches approach this issue? Follow after the jump for a look...

I went to Behind The Net and pulled down the data from last season, and screened down to players with at least 40 games played, to get a look at the regular guys playing just about every night. I broke them down between forwards and defense, and looked at how widely two values varied within those groups for each team:

The best measure we have for the average quality of opposing skaters faced by each player. High numbers on the charts below indicate that some players are facing a high level of competition, while some of their teammates are facing much less. Lower numbers indicate that this factor plays less of a role in who a coach decides to put on the ice.

The percentage of non-neutral zone faceoffs taken by that player in the Offensive Zone. High numbers indicate that certain players are utilized more in specific offensive or defense situations, while lower numbers speak to a more evenly-spread workload.

Again, for each of these stats we're looking at the standard deviation for these values within that team. What I'm trying to get at is not which team values are high or low, but rather how much individual player results vary within each team. 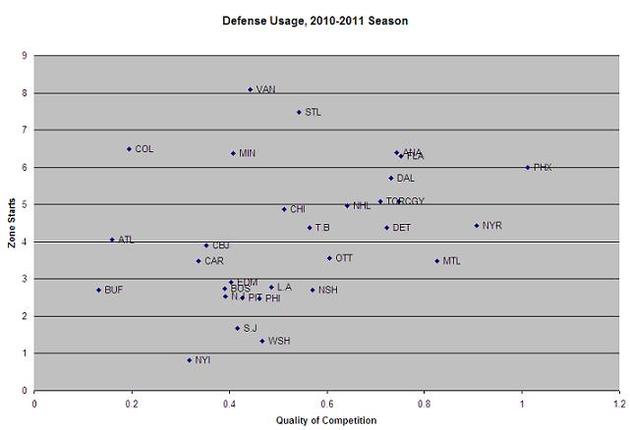 What catches my attention are the outliers, like the Phoenix Coyotes as a team which has the widest swing in Quality of Competition, meaning Dave Tippett is much more active in matching his D up against particular opponents than the Buffalo Sabres, Atlanta Thrashers (RIP) or Colorado Avalanche did (remember, this is data from last season). The New York Rangers and Montreal Canadiens also stand out as "matchup"-type teams.

Flipping over to the Zone Start perspective, it's Alain Vignault and the Vancouver Canucks who jump to the fore here, a result that's none too surprising to anyone who has studied Zone Starts to any extent. What strikes me as a bit odd, however, is to see the San Jose Sharks and Washington Capitals down near the bottom of that list (only above the New York Islanders), as I would think that with offensive specialists like Dan Boyle and Mike Green, those guys would be deployed for significantly more offensive zone faceoffs, but that doesn't appear to be the case. 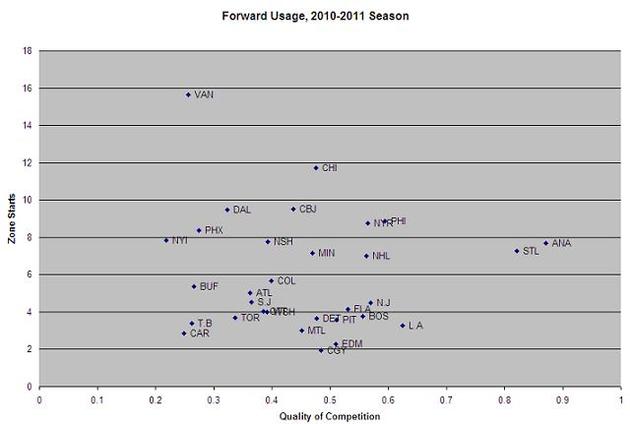 The first thing to note is the difference in scale - that Zone Start axis is twice as great as on the defense table, and it looks like that's almost entirely due to two teams. The Vancouver Canucks are off-the-charts in terms of the extent to which they spread their forwards between offensive and defensive zone draws (the Sedins get the gravy, while Manny Malhotra toils defensively). The Chicago Blackhawks stand a fair bit above the rest of the NHL, however, even if they are way behind Vancouver, while the Calgary Flames, Edmonton Oilers, Carolina Hurricanes, Montreal Canadiens, Tampa Bay Lightning and Los Angeles Kings care the least about offensive vs. defensive zone faceoffs.

In terms of matchups, the two that really jump out are the Anaheim Ducks and St. Louis Blues. Interestingly, both teams have fired their coaches already this season! It doesn't look like Tampa or Carolina paid much attention to either Zone Starts or the Quality of Competition, they just rolled the lines compared to everyone else.

Again, these charts are meant to describe the style of coaching, they're not intended as a qualitative measure of who's doing "good" or "bad" at winning hockey games. Perhaps over the weekend I'll freshen up these charts with current season data as well, as it would be interesting to see if the new coaches around the league are doing things differently.