The Nashville Predators' high-flying road show continues tonight with a game against the Philadelphia Flyers, one of the highest scoring teams in the NHL, but one which has also has shown vulnerabilty on their home ice at the Wells Fargo Center. Last month, the Erat-Fisher-Kostitsyn led the way for Nashville in a 4-2 win at Bridgestone Arena. Can they repeat the feat this evening in Philly?

Philly is one of the most dangerous offensive teams in the league in 5-on-5 play, and have a solid group of penalty killers, too.

Despite being one of the better teams in the Eastern Conference, the Flyers haven't been able to dominate on home, with an 11-7-4 record that ranks 26th in the NHL. On Tuesday, for example, they dropped a 2-1 shootout decision to the Winnipeg Jets.

Yes, they've got a gaping hole on their blueline with Chris Pronger shut down for the season, and yes, they covet Ryan Suter like nobody's business. If they can shore up their defense, Philadelphia would set themselves up as a prime Stanley Cup contender, but until then, they'll settle for outscoring opponents, and look who's leading the Flyers in goals these days:

For more on the Flyers, head on over to our SB Nation colleagues... 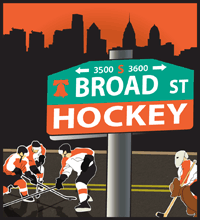 As regards the lineup, both Francis Bouillon and Jerred Smithson are described as probable by Josh Cooper, which could lead to some interesting roster decisions for Barry Trotz. If forced to scratch 3 guys tonight, who do you go with?

Regardless of who is scratched, however, what are we supposed to make of this bunch? Tuesday's stunning win at Minnesota has this band of youngsters (Brat Pack?) within sniffing distance of not just the Central Division lead, but the top spot in the Western Conference and the overall NHL, too. Dare we hope that something fundamental has developed within this squad over the last couple months, and that they legitimately belong up there with the NHL's elite, or are they simply playing over their heads right now, due for a fall back closer to .500 hockey at any time?

The analyst in me says the latter (those possession numbers, which are our best indicator of future performance, are still among the worst in the league), but the fan in me just sits back and enjoys the ride. None have contributed to, or benefited more from this hot streak than Pekka Rinne, who is gaining attention at the NHL offices for his recent numbers.

Things like "19-2-0 in his last 21" and "10 straight wins" , are obvious enough for anyone to grasp, but his fundamental metrics are on the rise, as well. Among goalies with at least 20 games played, Peks is now 7th in even-strength save percentage (our single best indicator of goaltending talent) with a .932. Earlier this season he was down in the 15-20 range, but as the roster has stabilized somewhat the leaks seem to have been plugged in the team defense in front of him.

Can Rinne deliver another shutdown performance against the hard-charging Flyers tonight in Philly? Tune in at 6:00 p.m. Central on FS-TN to find out...

UPDATE: It turns out that, somewhat surprisingly, Pekka will not get the start tonight, and Anders Lindback gets the nod instead. This marks the second time in recent weeks that the team is playing a high-profile Eastern Conference opponent, but the Predators are going with the backup instead of their #1 guy (recall the 3-0 loss to the New York Rangers last month).