Tonight against the Carolina Hurricanes, the Nashville Predators introduce their newest acquisitions to the lineup: center Paul Gaustad, and wing Andrei Kostitsyn. These players, Gaustad particularly, will be expected to contribute immediately. These were not moves made with the hope of Nashville winning a round - team management believes this team, as now constructed, is poised to go far.

Besides that, however, the Preds are four points back of St. Louis and Detroit for the Central Division lead. The next two games are against teams from the weakest division in the NHL, and represent four points. No team in the league is truly an easy out, but contests against Carolina and Florida might not be as physically demanding as say, the Canucks or Blues, and the Predators would do well not take their foot off the pedal.

Josh Cooper reported this morning that fog delayed Nashville's flight, so it doesn't appear they've taken their morning skate, meaning we won't know where Gaustad and Andrei Kostitsyn will line up tonight, or if Ryan Ellis will be in for Jack Hillen.

In the mean time, here's how the Canes and Preds stack up against each other, via NHL.com: 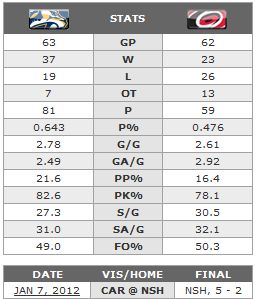 For the Carolina perspective, check out Canes Country.