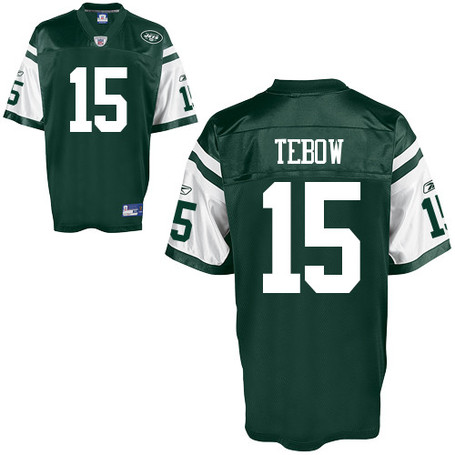 The last time Alexander Radulov played a hockey game in Nashville was April 20, 2008, the day Red Wings eliminated the Predators from the playoffs. Radulov's performance was seemingly as ignominious as his subsequent departure: 0 G, 0 A, -2, and a team-high 4 PIM.

One incredible stat from that night, however, was Radulov's 17:20 TOI, in spite of his 4 minutes in the box. In that game, Trotz leaned on the 21-year-old Radulov for offense. With 23:08 TOI, a 23-year-old Ryan Suter lead Predators' defensemen. Fresh-faced 22-year-old Shea Weber wasn't far behind at 19:17 TOI.

And behind these youngsters, the veterans filling the gaps with 17+ minutes TOI that game included: Radek Bonk (a lovely -31 that season), Marek Zidlicky, and Greg de Vries. Even Darcy Hordichuk dressed, playing all of 3:46.

I'll get to the Winnipeg Jets in a minute, but I wanted to reflect on how far the Predators have come since the fire sale, because that box score blew my mind. I might complain about the Predators' over-reliance on rookies, but at least this group can shelter those guys because of a strong core. Can you imagine Brian McGrattan dressing against the Wings in the playoffs this season and Nick Spaling playing 18 minutes a game? 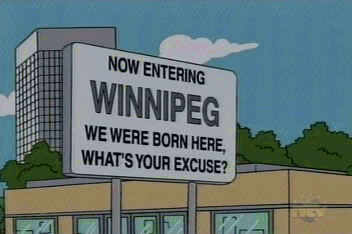 Without huge names, the Jets have a quietly solid forward group. The play a good possession game and rely on several different players for scoring, not unlike our beloved boys in banana.

The Jets, however, are coming off an important OT win last night against a division-rival (Capitals). The Preds have to take advantage of the physical and mental exhaustion of their opponent.

The forecheck, in particular, needs to be aggressive. Radulov, Borque, and Erat looked good on the forecheck last game, and all three scoring lines will need to play physically. The Jets' defense is beatable. Dustin Byfuglien is on their top pair, who you may remember as the Chicago Blackhawk's forward-turned-defenseman who David Legwand systematically pantsed in the 2010 playoffs. 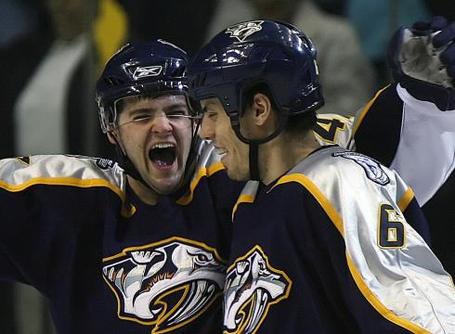 Despite losing handily, facing the deepest forward corps in the league, and not getting the last change, the Predators pretty impressively previewed life with three scoring lines, Thursday at Pittsburgh.

Had they not whiffed on several empty-netters, the Fisher and Spaling units could have both came away with a goal each. Fisher, Sergei, and Marty's passing chemistry was evident, even if they were all gripping the stick a little tight. Borque, Spaling, and Andrei also showed some promise as, despite all their differences, three forwards who aren't afraid to take the body on the forecheck.

And boy did Leggy's line look good. Radulov was a good player before, but now he's a complete player and it's fun to watch him make all the right decisions with and away from the puck. And when it is on his stick, it's not coming off easy.

I don't want to underestimate Winnipeg, but Little-Burmistrov-Slater does not cause the same match-up problems as Crosby-Malkin-Staal. With Gaustad in the lineup and the Preds getting last change, expect Trotz to work some favorable match-ups for Legwand's line in an attempt to spring 47.
Looks like Honey Badger and Tootoo will get needed rest. Wilson and Josi aren't coming back yet, but Gaustad is probable. I wouldn't be surprised if Ellis gets in after Bouillon's nausea-inducing turnover the other day. Just don't expect to see the Human Rocketship on the second pairing again, after Tuesday's failure to launch.
Lindback might also start after a series of weak outings from Pekka.
Kostitsyn-Fisher-Erat
Radulov-Legwand-Hornqvist
Borque-Spaling-Kostitsyn
Yip-Gaustad-Halischuk
Weber-Suter
Hillen-Gill
Klein-Bouillon