The Predators got out to a hot start in the first period, but didn't break out until the second period, when Gabriel Borque got a screened shot past Jimmy Howard presented by Amway. The Predators tried to give the lead back, going on basically a four minutes of uninterrupted penalty kill after their goal, but the Red Wings presented by Amway couldn't figure out Pekka Rinne.

Francis Bouillon would add to the lead in the final seconds of the period, picking up a loose puck from a Radulov-against-world scrum in front of the net. Radulov would then put the game away with a goal-- and his 100th career point--to open up the third.

The Red Wings presented by Amway couldn't muster much of an attack after that, as the Preds played solid at their own blueline. Jiri Hudler ended Pekka's shutout bid, but it was too little too late. Shea Weber scored the empty-netter.

Todd Bertuzzi is a thug, J.R. Lind is a marked man & more after the jump.

After an entire season of making fun of Peter Horachek's combative and darkly comical second intermission interviews with the booth, friend of the site J.R. Lind got an unwelcome message today.

And if there were any doubts that @peter7716 is the Preds' assistant coach, Horachek dropped the line "It's not so terrifying anymore," a thinly veiled call out of J.R.'s tweet, during the broadcast. Pete and Terry chuckled, knowing the young man was as good as gone. 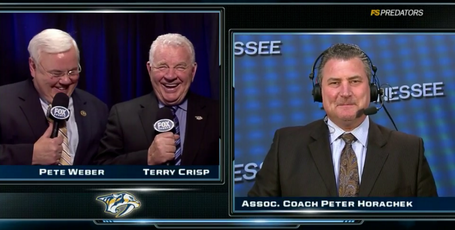 The lines to start this game were a little odd:

By the third period, however, we saw:

Hopefully from here on out, the lines look more like the latter.